1:51 PM on 12.02.2010 (server time)    0
This topic seems to breed endless discussion and a fair heap of confusion as well. I picked up the game on day one and raced most of the day with my family and didn't realize until a day or two later that I had yet to race with one of the "standard" cars. So here I was spouting comments about there being little discernible difference between the two classes and even going so far as to "straight up lie about shit" (thank you, TruckerSean) stating that standard cars did indeed have cockpit views.

It wasn't until later when I imported my GT PSP collection that I actually raced with a standard car and could compare the two classes.

So there IS some discernible difference. My only quibble would be lack of cockpit view, but graphically I would say the standard cars look great... just not AS great. If I popped GT4 in now I wouldn't suddenly think that all those models are ugly as shit. They look fantastic, they're just a little dated... but hey, they gotta look as good as the models in iRacing, right? Right? Amirite or amirite? And we all know that iRacing is THE sim racer. Looks aren't everything I'm told. 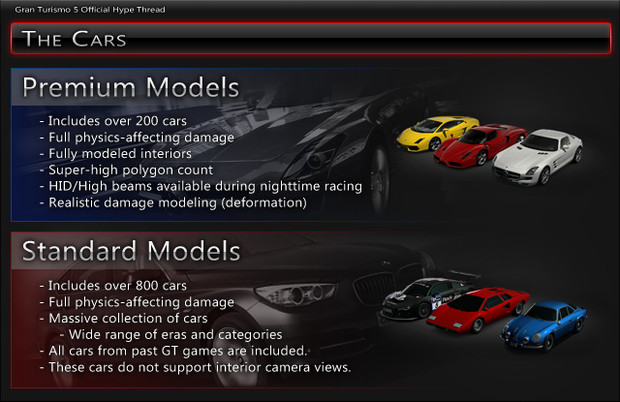 I think this is the first time I've seen this...

And there would still be much ado about nothing.

PS. I'm not going to go into any of the other issues I've had with GT5 so far (though I'm sure they'll be brought up in the comments). Suffice to say it is not a perfect game, but there is a fantastic racing experience to be had if you're a fan of GT. If you're not then this game certainly won't change your mind and why are you reading this anyway? :)
#Community    #PS3
Login to vote this up!

I'm a musician/drummer by evenings and a mild mannered creative services bro by day.

I have been gaming since I was 4 or so, starting casually with the Atari 2600 before getting into a serious hot 'n heavy relationship with the NES. It was all over after that. Throughout my gaming career I've personally owned the NES, Sega Master System, Game Boy, Game Boy Color, Game Boy SP, Turbo Grafix 16, Genesis, SNES, PS1, N64, PS2, Dreamcast, GameCube, PS3, PSP, Xbox360, iPhone... I sadly don't have my own Wii or DS right now, but I have easy access to both whenever I want so it's been easy to procrastinate on throwing the cash down on 'em. Looking forward to picking up a 3DS on launch though. :)

Castlevania is prob my favoritest ever, but I have a soft spot for all those early NES games of yore... Super Mario Bros, Duck Hunt, Double Dragon, Contra, Zelda, etc., etc., etc..

As I've grown long in the tooth I don't have much time for multiplayer shenanigans anymore, but I will dig into a good ol' single player campaign on the weekends when spare time presents itself.

These days I usually turn to my PS3, PSP, or iPhone for gaming comfort, but I occasionally haunt the 360, Wii, DS, and PC.

I don't fight console wars unless it's in the name of peace, aka I love to shut the fuck up and just play games.