Why Bayonetta is my character and game of the year

3:44 PM on 12.01.2010 (server time)    0
Guy gamers love it when they get treated to a sexy digital piece of ass. I may just be speaking for myself but I think that it�s a perfectly natural reaction to have your blood pump a bit faster when you are presented with a woman who is sculpted to be the object of your desire. But is the physical aspect the only thing that video game women have that makes them attractive? What about those other things that people have: personality, interests, thoughts, morals, souls. A lot of video game women lack these things. Now I don�t mean characters like Alex Vance and Elena Fisher. Those two and others show us that women in video game women can be more than just eye candy or princesses in castles. But those two lose something that the �sculpted� video game women have in abundance: raw sexual appeal. Please excuse me for saying this but I find it hard to take a video game female seriously when they are wearing armour that defeats the point of having armour or are walking around with double H size hoohas. It�s just too far removed from reality for me to truly believe that these women are more than just objects for my hormonal drive. So can video game women be both compelling and sexual? I thought that for them to be taken seriously, video game women would have to lose the thing that women have an innate greater control of over men, their sexuality. That is, until Bayonetta came along. 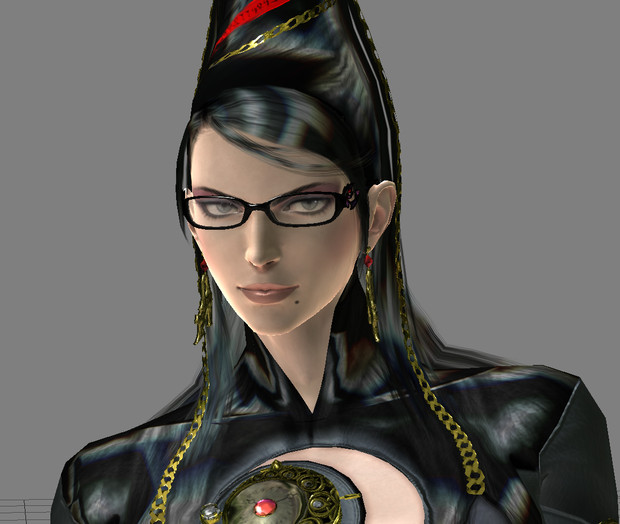 Her expressions speak volumes. Sometimes playful, sometimes receptive. Other times scathing and
oh so dangerous but you just always come back for more. Bayonetta�s face is a big part of what makes her a whole other breed of video game female. You can see the intent in her smile, the thoughts on her brow and the soul in her eyes. Next up, we have her hips. Obviously, she has one hell of a nice butt. Beyond that, though, I think that Bayonetta�s hips contribute a lot to her stance and that stance is what makes her so sexy to begin with. Bayonetta is able to convey emotion and intention with just her posture and much of that posture rests on those hips. I think that her hips and butt have obvious sexual appeal but their ability to create a strong pose at any times Bayonetta feels it is necessary is part of what makes her such a powerful character. At any time she wants she can put her hands on her hips, calk them just to the side and she instantly states what she thinks with her body. A lot better than vacant expressioned Kasumi, eh?


The gameplay of Bayonetta brilliantly emphasizes feminine power. The gameplay is able to achieve this by the use of Witch Time. Now, a lot of games have slo-mo in them. Mass Effect 2�s Soldier class, Max Payne, and Prince of Persia: the Sands of Time trilogy are but a few. But the difference between these uses and of slo mo and Bayonetta is implementation. In those game, you could use go into slo motion whenever you wanted as long as you weren�t out of sand, in cooldown, etc. In Bayonetta, you can only use slo mo when your being attacked. I think that this simple change in pace sets Bayonetta apart from other action games that, coincidentally, feature the manliest of men. God of War, for example. Gameplay in God of War often consists of hitting fast and hitting hard. Of course, for bosses you are supposed to counter attack a lot of them but that is beside the point. In God of War, you are supposed to utterly overpower and destroy your opponent. It is a test of one character�s strength against another. If you do not keep on the offensive, then you risk being overpowered by the enemies numbers. Thus, you must keep up a constant show of aggression. How very manly. In Bayonetta, if you try to play it God of War style, you�ll be dead very soon. This is because enemies take off a lot more of your health with each hit than in God of War and also their attacks often carry greater consequences like knocking you down for a time. This is why you must use Witch Time to succeed. Dodge the moment that your enemy attacks you and the world comes to a standstill, giving you precious few seconds to lay the hardest smackdown you can before the world starts back up. I think that this simple change does wonders to juxtapose Bayonetta�s femininity against Kratos�s overbearing manliness. Instead of going balls out and smashing your enemies beneath your boot, you wait for them to walk into your parlour. Instead of matching your strength with theirs, you let them put themselves in front of your barrels and capitalize on them when the time is right. I think that this difference is powerfully feminine. To not use brawn but rather grace and elegance to defeat the enemy is what makes Bayonetta�s gameplay so compelling and how it says so much about Bayonetta as a character.


Last point. Lara Croft and Kasumi�s sexuality are both sad affairs, imo. They are made to be sexual because whoever creates them knows that their hot figures are what draw guy gamers to them. This makes their sexuality submissive since it is made for our enjoyment. In stark contrast, Bayonetta�s sexuality is wielded like a weapon. Again, she is not doing what she does for our enjoyment. She does it because she loves to and it is this difference that makes her powerful. Often in the game, Bayonetta defeats her opponents with, literally, her sexuality. Summoning up the beasts of hell by sensually dancing is just one example of how she uses her sexuality as a weapon. I think that this differing use of sexuality makes Bayonetta unique in that, in a way, she is the one playing the game and the one who is in control, not the player. I feel this way because Bayonetta�s personality and her being is so powerfully commanding that it becomes the player who submits to her and plays the game just to be able to see more of her, instead of Kasumi or Lara Croft who are but dolls for guy gamers to play with.


Bayoneta showing of her moves. All credit goes to blaze and his expert play!
#Community
Login to vote this up!