12:42 AM on 11.30.2010 (server time)    0
See I got this and I was formatting it to post tomorrow when I realized I don't feel like posting tomorrow when I've already started working on it. Frankly, I sent out the interview on Monday and got it back Monday, it was the first time (I recall) of such a thing happening. So, when I got it, I just wanted to share it immediately. So, here it is. (Lots of small touches added BTW)

What made you want to go into writing, gaming specifically, and why here on D-toid?

Writing, because it's a fabulous creative outlet that I can engage in on my own terms, and as Steve Martin said in L.A. Story, "People seem to like the interesting word usements I make."

Gaming, because it's a long-time passion (30 yrs. now) and I've always wanted to share with people that there's more to the medium than pew-pew-pew. Not that a little unadulterated carnage isn't good for the soul from time to time.

Dtoid, because there's a genuine community here that is simultaneously welcoming and demanding of excellence. It makes you want to give just that little bit more. Dtoid (staff and community) also gets that "journalism" needs to be tempered with personality and humor when it comes to games and reaching the people that play them.

Where is home for you?

Austin, TX. An beautiful oasis in a wasteland of ignorance.

You were a clown eh? Please, describe those experiences and tell me why I should not fear you.

The Fool is a fabulous archetype that hides his wisdom by both recognizing and indulging in his own folly. There's nothing to fear; don't buy into the Steven King propaganda smear campaign. He's secretly a Templar, you know. (Law's Notes: See King Lear)

What game have you been enjoying recently?

Assassin's Creed: Brotherhood. Best surprise of the year for me. Best single-player campaign yet along with a thinking person's multiplayer component to boot. LOVE. IT.

The sequence towards the end of Big Trouble in Little China where Jack Burton is giving his tough-guy monologue to Lopan with the bright pastel-red lipstick all over his mouth.
(Law's Notes: Can't find actual scene, so here it is this.)

If you could punch anyone here on dtoid, who would it be and why?

Hmmmm.... mrandydixon? I hear he pays good money for that sort of thing. Great work if you can get it.

If you could hug anyone here on dtoid, who would it be and why?
After literally getting the swine flu at PAX Prime '09, I'm not sure that any of you bastards are fit for human contact. Not that that will stop me -- I love both hugs and Dtoiders. I'm feeling particularly affectionate towards my fellow Zero Cool cast members lately (Jordan, Dexter, and PerLee), talking with them every week is something I very much look forward to.

Now that I�m old I can finally�

Afford to fully support my hobby and stop trying to please other people so much.

What is your favorite aspect about the D-Toid Community?

The Dtoid community just seems to attract talent, personality, and positivity. Let's face it, most online communities, if left to their own devices, will devolve into the internet equivalent of Martin Sheen losing his mind in the hotel room at the beginning of Apocalypse Now. That's what amazes me about Dtoid: the community is almost entirely self-regulated, and yet it's full of people building each other up, sharing their love for a mutual hobby, and generally having one another's back. That's a rare phenomenon in ANY social group, virtual or otherwise.

Your wife sounds awesome. How did you two meet? Is she new to gaming?

She most certainly is. I count myself beyond lucky to have her in my life. We met through mutual friends about 5-6 years ago, and were attracted right away. The first night we really made a connection was St. Patrick's Day, which was awesome.

She was not a gamer when we met. I got her interested in Guitar Hero a few years back, and have slowly been building up to more complex games. She loved Loco Roco and Patapon, and recently Kirby won her over (she's an avid knitter, so I knew that would be a ringer) and that is the first game she's ever "finished". But I fear I may have done my job too well and created a monster. She decided to pick up Assassin's Creed: Brotherhood next and has been playing it obsessively. She put at least 18 hrs. into it over this last weekend. It's encouraging, because I feel like there's a large part of me that she understands just a little bit better now.

Anything in the world you are currently excited about?

I am potentially going back to school soon at the age of 35, which is both exhilarating and cause for hyperventilation.

Anything in the Fall/Winter seasons excite you? (Movies, Books, Music, Television)

Planning on reading Game of Thrones for the first time in preparation for the upcoming show. In my current show rotation is Dexter, Boardwalk Empire, & Castle (because Fillion).

You've detailed love and its stages. How has those levels apply (applied) in your own life?

Well, I've lived through all of them and made the mistakes associated with each along the way. I think everyone who finds a healthy, lasting love in their lives has learned the hard lessons that each stage has to offer and eventually transcended them. How long we tarry in each of those stages varies from person to person. For me, I lingered too long in the very first stage -- I had an overly idyllic view of what love was supposed to be and I built it up to be this thing that could never truly be fulfilled by any living human being. Thankfully, after much heartache, loneliness, and trial/error, I can just accept the love in my life for what it is instead of having to put my own interpretation or filter over it. I've found that love without artificial drama and unrealistic expectations is much more "boring", but infinitely more fulfilling than any storybook definition of the term could ever be.
(Law's Notes: See)

If hypothetically you become the opposite gender, you would�

Look in the mirror every morning and declare in my finest Ackbar-ese -- "I'M A TRAP!"
(Law's Notes: This is a Trap) (Hint: It has a penis but is also SFW so its cool.)

If I were to tell you that you have one more day to live, what would you do.

No offense, but I would ask to see your medical credentials. 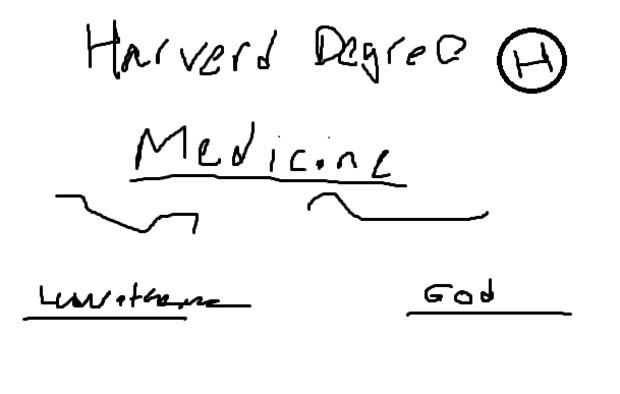 I'm a freak; I like the girls with the BOOM.
I once got busy in a Burger King bathroom.

What is something you think is overrated, and something that is justly praised?

Overrated: Calling things overrated. It's okay to not like something that a lot of other people like; there's no need to try and somehow devalue it for others in order for your opinion to be valid for you. The man who has nothing to defend need never fear attack.

Since we're on the topic, what was the scariest moment of your life, the happiest?, the most romantic?

Scariest and happiest are easy, those are both my wedding day. The most romantic was when we first rented a house together and none of our stuff was there and the power wasn't even on yet but I still dragged her out there on a cold cold night and I had a card table and two folding chairs set up with candles, wine, and a nice dinner waiting for us. We bundled up and stared into each other's eyes as we experienced "our house" together for the very first time; we didn't feel the cold at all.

Lastly, If you could be asked anything, what would it be, and answer it please.

Q: Would you be so kind as to take this excess $74.9 million off of my hands?

A: Dunno. Sounds like a hassle, but for you -- I'll make an exception. Hand it over.

Sean Carey
#Community
Login to vote this up!