Why Batman? Why NOT Batman? I love Batman. He�s the best superhero by far. He�s actually human. He doesn�t have any overpowered magical powers to do all the work for him. He uses his brain and muscle to get the job done. Being human, he has his own weaknesses. These factors make him a relatable character. Even to us non-millionaire playboy types.

The main reason I�m writing this "quick" review for Batman: Arkham Asylum is because the Game of the Year edition, which includes four bonus challenge packs, is now on sale on the PC Steam platform for $10.20. If you have a relatively new PC (check its system reqs) and have not played this game, you owe it to yourself to pick up this game right this second. Even if you don�t love Batman, the game is just great, and definitely my candidate for Game of the Year. So hop onto your Steam account and buy it now.

Okay, so you can�t blow ten and some change without reading my full thoughts on the game? Ugh, well at least the game will still be on sale for another 16 hours from now (at time of writing, anyway).

Batman: Arkham Asylum was originally released for Xbox 360 and Playstation 3 in 2009. I built my PC in the summer of 2009, and since then I�ve been really weird about playing games that release simultaneously on consoles and PC. However, B:AA wasn�t released on PC until May of 2010. I actually stayed away from all info on the game and waited it out so I could enjoy the game with all of the surprises and twists intact. I guess you could call me a hardcore PC fan. But that�s not important right now. 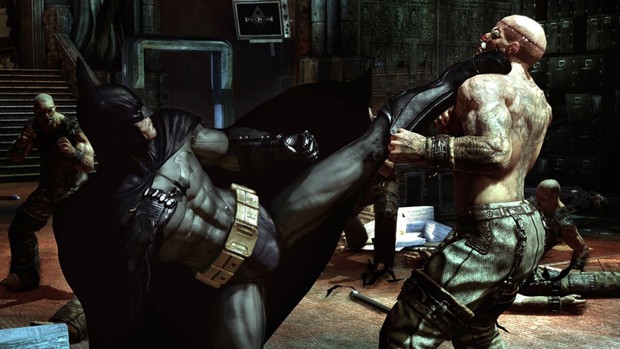 On top of exploring a huge, gritty asylum environment and kicking the bajeezus out of thugs and a plethora of Batman villains, you are contacted early in the game by the Riddler. He issues challenges in the form of riddles (duh) for Batman to solve. While they are not really story-related, they are a total blast to try and figure out. Completing these challenges adds to your experience and helps you level Batman up.

That is another factor that I adore about the game. I have an issue paying full price for any non-rpg nowadays, because games are too short to warrant the price tag. AA has an rpg element to the game, where Batman levels up by completing Riddler challenges, performing combos and progressing through the story. You are able to unlock new abilities and gadgets to make crime-fighting a bit easier. Overall, the Riddler challenges are very addicting and if you�re like me you�ll spend a lot of time trying to figure them all out.

This game currently has a 91 on Metacritic. I would give it a 95/100. I really don�t have any major issues with the game. One complaint I have is one of the boss encounters is really, really lame. Actually, there are a few boss encounters that could have been made so much better. Also, I feel like some of the villains could have had more time in the light. Other than those small complaints, I give this game my highest approval.

If you like action games, batman, playing detective and admire beautiful graphics in games, then this game is for you. This game is by far worth the $29.99 it retails for, but you would have to be some kind of goofball (or have a bad PC) to pass up on this title at just $10.20.