The Space in-between the Lines

1:36 PM on 11.25.2010 (server time)    0
Dragon Age: Origins has been one of the most highly awarded western RPGs in recent years, and after you play through its main campaign it�s very easy to see why.

I hopped on the Dragon Age: Origins band wagon a little late, about 9 Months if you want to be technical about it. I picked it up around December 2009 and started to play it�then got side tracked with other work�and other games. I�ve left it on the backburner for a few months now, not really having any motivation to finish off the campaign. This past August I caught a bad cold and was stuck at home for a few days with nothing to do other then watch movies (I watched Hot Fuzz around 10 times in 3 days, that movie�s great!) With this new impetus I thought that I should play some more Dragon Age to see what everyone talked about.

I�ve just completed the game and�only now, with a good nights� sleep to ponder on it, do I really understand the underling consequences to my actions. This post will have some spoilers in it, so I�d just like to get that out of the way. 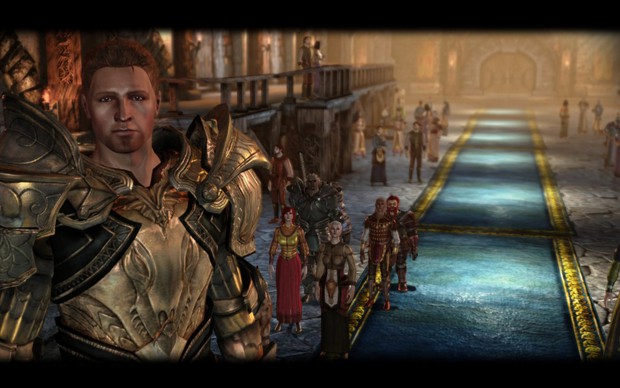 Afterwards, at a celebration in Denerim, all of my companions were congratulating me on a job well done. None of them really knew the truth of the dark deal that I made to save my own life, except Alistair. And I chose to keep it that way.

In the closing moments of the game, it described how my actions affected Ferelden. Most of them were in a positive, more beneficial manner; Teagen was named the new ruler of Redcliffe, the Circle of Magi was returned to power and the Sacred Ashes of Andraste are now well protected against any other potential scavengers. The Dwarves however�let�s just say that I probably don�t have many friends left in Orzammar. But the rest of the Wardens look at me with suspicion, because I was able to defeat the Arch Demon and survive. It bothered me to know that I�m respected and admired as a hero to Ferelden but that in the eyes of the people I look up to the most, I am a fraud.

After this playthrough of Dragon Age, it made me start to wonder about how I deal with difficult choices on a daily basis. Like most people, I weigh out the pros and cons of decisions and choose the one that gives me the least risk with the greatest reward. In games I tend to stick by this method, but every now and again I take a leap of faith and make a different choice. In reality, I just stick to the sensible and least difficult choice; and this has let me miss out on some very interesting opportunities.

I think that what made Dragon Age: Origins stand out as such a unique and interesting experience was because of the choices it asks you to make. It tells you that �Life is difficult and full of difficult choices, some of which you won�t like but that must be done�. It forces you to question how much you value your life, as well as the lives of others. It asks you if you�re willing to let these innocents die so that many more can live.

To me, these feelings and the thought process that I had to go through to get through some the decisions, it really re-enforces my belief that videogames can be a great storytelling medium and that it can illicit emotions in you that you cannot get from simply reading a book or watching a movie. By travelling all over Ferelden, making new allies and enemies, making these difficult decisions, by putting in all of this effort for one ultimate goal it forms a bond between the player and the characters, the land and the story. You want to see what happens next in the game, of course, but more importantly you want to see if Ferelden thrives because of your actions or if falls apart.

Dragon Age: Origins has to be one of my favorite RPGs of all time. Its� story drew me in and showed me a world that was harsh and cruel at times, but that still had a lot of history and wonder to it. It helped me see that I may need to take a few more leaps of faith in my own life, and to have the fortitude to make the difficult choice, whether it is in my career, finances or relationships. If you haven�t checked out Dragon Age: Origins, I highly recommend it. It�s a great experience from start to finish, and maybe it can help you figure out something about yourself too.

Disclosure: I have worked on a few iOS and PC indie games, as well as am currently employed at a major North America videogame retailer. My previous and current employment does not and has not affected any of the pieces I have written, but it is something that you, as a reader, should know.