Cataclysm, should I care?

No, the servers haven�t been smashed with a hammer.

The new expansion for the incredibly successful PC MMO, World of Warcraft is slated to hit on December 7th. Titled �Cataclysm,� this expansion further expands the story of the World of Warcraft universe by bringing back an ancient, powerful dragon from the grave. I think. Maybe it releases him from some sort of prison? Maybe it�s a combination of both. I don�t know, I don�t wear a red shirt. While the expansion will officially start on December 7th, a significant event happened after the server maintenance yesterday. Yesterday was the official date of the Shattering.

In other words the big zombie dragon named Deathwing emerged from his underground jail cell/sepulcher. To say he is a bit perturbed is an understatement. His actual emerging from the earth (I�m sorry, I�m not going to say Azeroth every time) caused quite a bit of physical damage to the geography of the planet. Former deserts are now flooded. Volcanoes have randomly erupted in once peaceful woodlands. Massive scars have been carved across the surface of the earth, erecting (giggity) new earth formations and tearing down older ones. Deathwing himself is also flying around the planet, popping in on players in random locations to say hello�with fire.

I have played WoW off and on since the day the game went live. I�m well aware of all of the �old content,� the zones where I leveled up my WoW characters over the years. I could do quests without having to look for help online. I got used to the geography, aesthetics, colors and quests of all of these various zones. Now, everything that I have been used to for the past few years has changed pretty drastically.

I was not subscribed to WoW yesterday prior to the servers being up. I was hanging out with a friend who actually is a hardcore WoW player. Once we got the files updated on my PC, he logged into his account and with me over his shoulder, we checked out what had happened to Orgrimmar, the capital city of the Orc race. 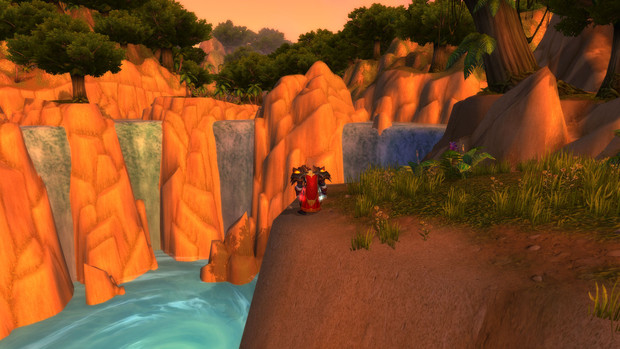 (view from northern STV looking past the crack towards southern STV)

I have to say, I appreciate the amount of love Blizzard has put into this game. They are breathing new life into old zones, ironically by destroying them. It was strange to see my beloved Stranglethorn Vale all broken up, but the way they did it was really neat. However, this brings me to the main point of this blog post. I intentionally avoided websites that had Beta coverage of the Cataclysm expansion because I wanted everything to be a surprise. I haven�t read too much on the expansion, just gotten a bits of info here and there from friends who keep up with it. Now that I�ve seen a lot of what they have done to Azeroth, I find myself a bit disappointed. Why? Well, what else can they do?

This expansion is about the shattering of Azeroth and the releasing of Deathwing upon the world. There are areas that are not accessible yet that will be accessible in the expansion, but I have to wonder: so what?

Honestly, when I look back at the time I have spent playing this game, I have a hard time deciding which factors kept me re-subscribing. I�ve looked into the expansion a little more, but it all looks the same. There isn�t anything drastically new about the game play of World of Warcraft. You control a character, run around using different abilities to kill of computer controlled monsters or enemy players. You put time in so that you can find the next marginal gear upgrade to make bigger numbers appear on the screen when you hit something or heal an ally.

Really, WoW is just a glorified version of Microsoft Excel. The fact that people have created formulas and imported them into Excel spreadsheets that help players determine which piece of armor is best for them only further supports my thoughts.

I still have not upgraded my account to Cataclysm status. I spent $14.99 yesterday to see these changes to the world, and while I admire Blizzard�s work and their dedication to WoW, I am already bored. There is nothing to do in the game right now other than explore. Raiding or PvP'ing for new gear is pointless since it will be replaced in Cataclysm.

Even when Cataclysm comes out, WoW players will be doing the same thing they have been doing for the past five years. It might look different, have better graphics and have new monsters to kill. As far as I am concerned, however, it�s still just slaying dragons. Different looking dragons, but it�s the same thing nonetheless.

Sorry that was so long, sometimes I'm not very good at condensing. I hope you enjoyed it, and I welcome comments/criticisms about my writing and my content. That's all for now! Stay chill bro, have a great Thanksgiving, and take comfort in the fact that one anonymous blogger on the internet loves you.