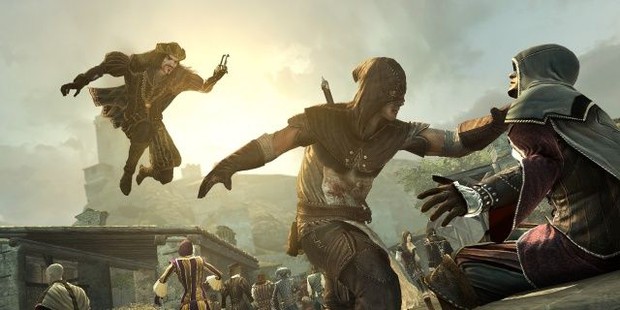 Then we come to the multiplayer, something that many people questioned not only whether or not it could be executed well, but whether or not something like this was even necessary. I wondered how Ubisoft would pull off the multiplayer, and the more I saw, the more I kept thinking that it was simply "kill somebody and then try not to get killed in the meantime". It does boil down to that, but the way it's presented and how much fun it is shows that they knew just what they were doing here.

The first gameplay mode is "Wanted", and plays very simply: you're given a picture of what character you're looking for (and the selection is quite impressive with more than 15 characters) and a compass at the bottom to point you in the right direction that glows when your target is in sight and grows wider when you draw closer. A chase mode begins if you're not stealthy enough in hunting your prey and you now have to catch them before they escape, or you lose the contract and they score an escape bonus, providing a little bit more incentive. Highest score wins, with bonus points being included for killstreaks, aerial assassinations, killing your prey in midair, and for how stealthy you were in each kill as well as a bonus for escaping a chase. An "Advanced Wanted" mode is unlockable, which is essentially the equivalent of "hardcore" mode.

The second gameplay mode is "Manhunt", or a team version of "Wanted" and also plays simply; two teams of four, one being hunted by the other. The goal of the prey team isn't to fight back, but to hide and not be killed, simple enough. There are two rounds per game, with team roles switching at the begging of each round. Scored the same way, bonuses and all, as "Wanted", highest team score wins.

The last gameplay mode is "Alliance", and is a more interesting mode in which players are paired up to kill the same prey and have to watch each other's backs. It's just like "Wanted", but with a partner, which adds an unexpected depth to the gameplay. Highest scoring pair wins.

There are plenty of unlockables, from characters to clothing colors to gameplay items that unlock as you level up. There are quite a few items to use, like the "disguise" ability which changes your character, or the "morph" ability which can only be used in a crowd and changes them all to match your character, or my favorite, the "hidden gun" which adds an element of long-range assassination at the cost of the stealth bonus. There are twelve different active abilities, each of which can greatly alter the gameplay dynamic, and are also upgradeable themselves (for instance, the "hidden gun" can be unlocked to upgrade to firing faster and reloading faster). There is also an upgradeable killstreak bonus which adds more a larger bonus to your score after a killstreak of 3, and a few extra abilities to either reset your active ability cooldowns or double your score should you fall into a loss streak.

All together, Assassin's Creed: Brotherhood is a fantastic package with an engaging and full single-player mode as well as a simple, yet tremendously well put together multiplayer section. There is more than enough content in a campaign mode that also takes a little time showcase more of Desmond's emerging talents as an assassin to make it a tremendously satisfying title by itself, but the amazingly well designed and implemented multiplayer make this an awesome experience and a triumph for the Assassin's Creed franchise.