Countdown to Epic Mickey: "All Wet" 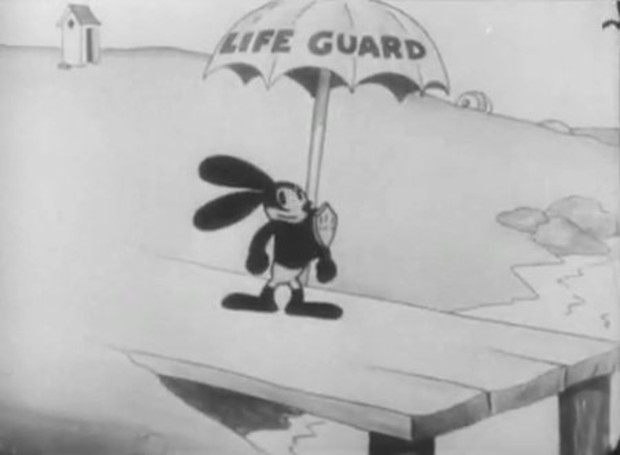 Well, I screwed up. Yesterday, I decided to make "Steamboat Willie" my cartoon of the day. But thanks to my inability to realize what day it is, I missed the opportunity to use today--the anniversary of that cartoon's release, and Mickey and Minnie's official birthday--as my "Steamboat Willie" day. Oh well. That's what happens when you make stuff up as you go along. So instead of celebrating the Mouse, today we remember the Rabbit. Seeing how jealous Oswald is of Mickey taking "his" fame in Epic Mickey, I like to think he'd appreciate it.

This cartoon, released in 1927, is not necessarily notable for anything special. It just happens to be my favorite Oswald cartoon. A couple friends of mine and I did an Oswald marathon one night (if you are at all interested in animation history, I highly recommend the Walt Disney Treasures: The Adventures of Oswald the Lucky Rabbit DVD), and for whatever reason, this cartoon cracked me up. My favorite part (because I'm sure you're dying to know) is when the dog sets his hot dog free. It'll make sense when you watch it, I promise.

One thing you'll notice watching this cartoon (and any number of cartoons from this era) is how strange everything is. Without sound, the visual gag was king, and animation afforded filmmakers the ability to make any sight gag imaginable. That's why you have boats rowing through the air, cash registers that grab the money themselves, and a rabbit spanking a hot dog for trying to escape the grill. It's weird, and in my opinion, quite funny.

Side note: I mentioned that this was my favorite Oswald cartoon. Last weekend, I had the opportunity to play a demo of Epic Mickey at Downtown Disney. Some developers from Junction Point were there to guide people as they played and to answer questions. I asked them if they spent a lot of times watching the cartoons, and they told me that everyone was actually required to watch a ton of them, from Mickey and Oswald to Donald and Goofy. I asked if this particular cartoon made it into the game in any way. While I was excited that they actually knew which cartoon I was talking about, I was disappointed to find out that this particular one isn't really referenced in the game. Oh well.

But seriously, I want that waving hot dog on a t-shirt.