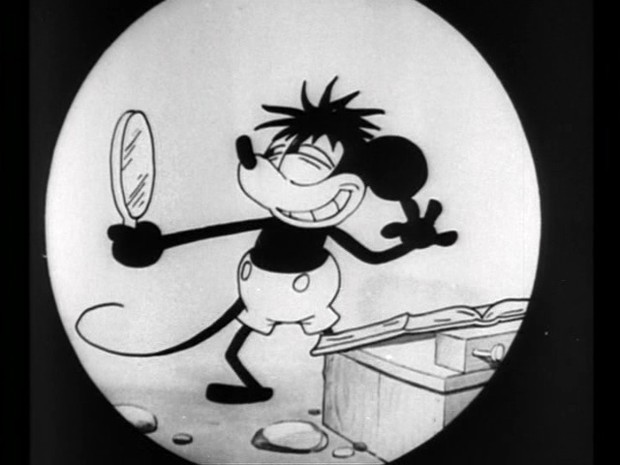 So here's a thing I've decided to try. With Epic Mickey two weeks away, I've decided that in preparation, every day I'll post a classic Mickey Mouse or Oswald the Lucky Rabbit cartoon with a little bit of commentary. We'll see if anyone notices, but I figure that since a lot of these cartoons are going to be referenced in the game, it's a good way to get ready.

First up is the very first Mickey Mouse cartoon: "Plane Crazy." Since Disney uses the premiere date of "Steamboat Willie" (November 18, 1928) Mickey's official birthday, most people assume that it was also Mickey's first cartoon. While it was the first cartoon with synchronized sound, his actual debut came in this silent cartoon on May 15, 1928. It was later re-released with sound on March 17, 1929.

Watching this cartoon, you'll notice something to which Holmes alluded in his preview: Mickey was kind of a jerk, trying to kiss Minnie when she clearly had no interest. Because of his behavior here, which is similar to the way Oswald behaved in his cartoons, a lot of people believe this was originally meant to star the amorous rabbit.

I'll be back tomorrow with another Mickey cartoon. Hope you all enjoy this little feature!
#Community
Login to vote this up!