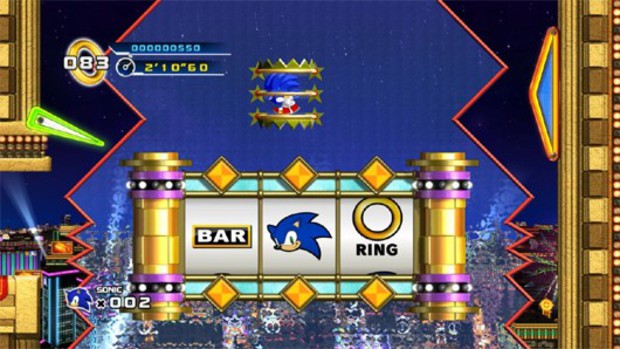 We also have an entirely new soundtrack on our hands. There are plenty of mixed views on the music, but I have to say, there are some really catchy songs in this game. Not every song is great mind you, some like the Casino Street Zone's are quite forgettable, but there's still some good stuff in store. Some of my favorites are Splash Hill Zone Act 3, Lost Labyrinth Zone Act 1 and Mad Gear Zone Act 2. You might not like all of it at first, but strangely enough you may eventually find yourself humming the theme of several tracks.

Overall, I have to say Sonic 4 was a surprise, and a pleasant one at that. It doesn't feel exactly like the old games, and I'm okay with that. For Sonic Team's and Dimp's first try it was close enough. The game was challenging and actually felt like Sonic finally did go back to his roots, focusing on both speed and platforming. And the mixture of old and new elements made for a very well rounded experience. With 4 Zones containing 3 Acts and a boss each, as well as seven special stages, the game has a good amount to offer. To be honest, I'm looking forward to seeing what's coming in future episodes (the teaser after beating the game with all emeralds does show you one thing). Despite it's flaws, I had a lot of fun playing it, and it's been awhile since I've been able to say that with a Sonic game.