How did you get into blogging, and why here?

I got into blogging because of Destructoid. When I first joined, the c-blogs didn't exist. When they were introduced, it was a cool idea to be
able to put your thoughts about videogames on to an already successful site.

How did you get your name and avatar?

My name was given to me by my friend Chuck(who I call Collard Greens, or CG). He did it because I
had a bad habit of always saying "I used to do this....I used to do that" and the like. Plus, it rhymed with Collard Greens, because we formed a
white boy rap group who performed on our apartment stoop on a nightly basis called Stoopside. People in lawn chairs, 40s, black n milds, the
whole deal. I kept the name because I pretend that everyday I try to evolve as a better person, becoming better than I was the day before.
Hence, I used to be, but now I am. As for the avatar, it's a pic of me that Grunchk1n shooped Guile's hair and wife beater on. Because when I
street fight, I main Guile.

If you could call a country your home, what country would it be?

Where da hot wimmens is at.

Favorite game? I know you have one.

Mario 64, hands down. The exploration in that magical game blew my mind. I still go back to it every
couple of years and get the 120 stars all over again.

Jesse Ventura from Predator. "Bunch of slack-jawed fagets around here. this stuff will make you a goddamned sexual
tyrannosaurus." 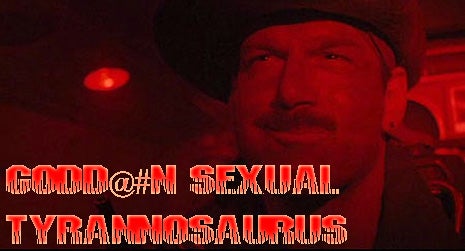 The Forums huh? Last time I interviewed one of you guys I was introduced to unicorns and swing sets. What's up with those?

Well, unicorns are for obvious sexual reasons. The ladies like uncorns because they get to ride them while being able to hold on to the horn, kind of like a DP but without the mess. Guys like them because when you ride up to a lady on one, it's gaint horn looks like it's coming from your crotch. Now she
has a permanent image of you with a giant "horn" burned into her mind. Score. The swing is also sexual. You see, the forums are like the
bondage section of AdultFriendFinder.com, except you don't get a safeword. We take to your orifices like a 5 year old who discovers a dead
animal and a stick. We keep poking and poking till something comes out that excites us. I'm just sorry you didn't get to meet the bears, or see the rainbow. Next time you're down there, just ask someone to PM you the rainbow. It has some of me in it ;)

The greatest thing I could ever do with my life. There is nothing that can prepare a man to be a father. The
joy that comes from my daughter is indescribable. Sure, it's challenging, but children unlock a place in your heart that you never knew existed.

If you could punch anyone here on dtoid who would it be and why?

No one. When I hit someone, they don't recover. There's nobody on the site I dislike that much. I would arm wrestle a couple of assholes though. :) (I believe every word of that...)

If you could hug anyone on dtoid who would it be and why?

Just one? Hmmmm. All the hot forum ladies, because those women deserve to be
bear hugged. But most likely Char Aznable, because we have a bromance over the Wu-Tang clan and I want some of that pizza he's always leaving me for when we play games together.

Forum person A and Forum person B totally have a "thing". Who is person A and B?
There's many. We have Jon Bloodspray and cocaine,
Gyrael and Emma Stone, The Guy With The Hat and Zodiac Eclipse (don't ban me mom), the list could go on forever. But, the most
provocative one has to be Sam Spectre and Buddah. You walk into a thread with those two in it and you can just smell the sex for miles.

As cool as I seem in my own mind.

Now that I'm old I can finally...
There's not much I can do that I couldn't do before. But there are things I can no longer do, like chat up hot high
school girls. Damn old age.

AWWW YEAAAH, Never too early to start thinking about Christmas, want anything?
In the words of DayDay from Friday After Next "All I want is two fat bitches that have a name belt with glitter on it and two bags of chips to give the fat bitches" I'm sure Gobun would agree with me.

If maybe I told you that you might just have one day left to live what would you do?

Spend all day with my daughter till her bedtime, then go spend whatever money I had on hookers,blow, and a video camera(HD) to tape it all and go out with style.

Do you have a Prized Possession? (Note: Family and Loved Ones Do Not Count)
Many. I have my guitars, my microphone which has seen many shows, my painting I did when I was
young, my other painting that was featured in a art museum in Alabama, my Hank Aaron autographed baseball, and all my comic books.

So, you're on a sinking boat and there is one life boat left. There is a young woman, a child (gender neutral), and an Old Man...What do you do? (Note: Not who do you save...you could, just you know....what do you do?)

I would bang the young woman while we raised the child and ate the old man for nutritional purposes.

I don't want to ask another question, you ask one...also answer it.

Because, in the words of Bloodspray, we're just better people. ;) Oh, and Bloo farts.

Why did I think his name was usedtable?
#Community
Login to vote this up!