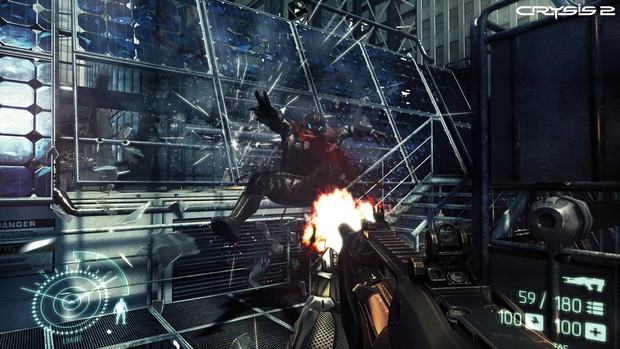 It's high irony that the sequel to a game most famous for its technical achievements should suffer the most grievous faults of any game on show at the Expo. By my own and a handful of other accounts, Crysis 2 was a mess and should probably not have been on the show floor at all. During my ten minutes with the game's multiplayer, I had regular pop-up, a highly unpredictable framerate and mixed visual quality. During conversations about the game with fellow players, two stated that the game had crashed on them mid-match. When a game's reputation is so firmly staked on its pushing the limits of technical excellence, why EA chose to show the public such a shoddy demo is difficult to comprehend. Even in graphical terms, the game was languishing well behind several of its show floor companions - even Killzone 3's declared PRE-ALPHA BUILD put up a good fight. The selected map, consisting of the upper floors and garden roof of a damaged skyscraper, had its highlights for sure (an impressively detailed New York skyline extending in all directions hinted at the scope of the city-based single-player mode), but many of these were more artistic than technical: a broken skylight gushing water and foliage through the roof of an exercise hall, with a trashed art-deco lobby and offices filling the floors below. The original Crysis crafted a number of memorably idiosyncratic images, most famously the frozen jungle, so it's a pleasure to see that Crytek's artists have once again put in a productive shift to bolster any graphical achievements the game hopes to achieve, despite still having a long way to go. Gameplay-wise, the overall feel was near-identical to that of Modern Warfare, but with the addition of a few player enhancements. The extended jump and ability to turn invisible could bring some interesting tactical variations when used correctly, but didn't seem to make a great deal of difference to the people I was playing (and losing) against. The main difference I noticed was that the penalty in accuracy for not using Iron-Sights aiming seemed to be enormous, posing major problems for anyone who, like me, finds hip-firing more natural. After getting roughly used to the dual analogue system (this was my first FPS at the Expo, and I hadn't used sticks in an FPS for almost two years), I was able to keep my reticule hovering over my intended target fairly constantly, yet even from close range bullets rarely seemed to hit their target. If that sounds like sour grapes, I played a lot of games very badly at the Expo while greatly enjoying them (Assassin's Creed Brotherhood for one), so would like to think that the humiliating final score didn't impact on my overall impressions. From my time playing, Crysis 2 would appear to be yet another serviceable FPS with a deficit of new ideas and in its early form, severely lacking the polish needed to hide them. Given the number of bugs present in the Expo build, the main question hanging over its head will continue to be why EA chose to show it at all.
_____________________________________________________________________________________

Thanks for reading! Tomorrow's final trio of games will take in Gears of War 3, Donkey Kong Country Returns and GoldenEye 007.
#Community
Login to vote this up!