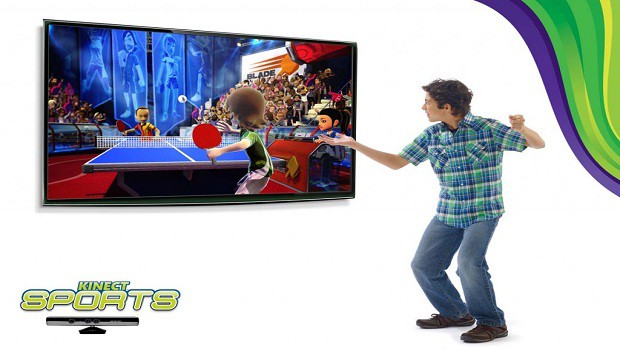 I didn't have time to play the Kinect extensively, limiting myself to the ping-pong game in Sports, but did find the time to ask many of the people gathered around its stage what their experiences were. For my money, ping-pong was a moderately enjoyable diversion that brought on a strange bout of self-consciousness despite having greater success in that game than many others at the Expo (my performances on FPS' could be generously described as starting cataclysmically and getting progressively worse) and being a long-term Wii player. Having a controller in-hand gives purpose to your actions: playing a game. Without it, there's a very sharp dawning of quite how silly you must look waving your empty hands through the air, especially with a sizeable crowd observing your every move. You play with an open palm simulating the racket, performing each swing much as you would in Wii Sports Tennis, only considerably more red-faced. It seemed more difficult to pull off cross-table shots, my better efforts coming by adopting the Wii Sports strategy of swinging earlier for a more acute angle. Most subsequent players simply ended up knocking the ball back and forward straight at each other until one of them missed their timing. That's not to say that there isn't a knack to it, but Wii Sports worked because while it wasn't especially realistic, anyone could pick up the fundamental rules of its mini-games very quickly and have a chance of competing, even though greater practice revealed depths that could swing matches back in the experts' favour. Granny might be able to get a strike in Wii Sports Bowling with little more than good fortune on her side, but to do it consistently requires a deeper insight into the game's nuances. Microsoft seem to have configured Kinect Sports with the mantra that experts deserve to be rewarded with complete dominance for their dedication and efforts. Hardcore gamers will therefore probably find this game a more appealing prospect than Nintendo's equivalent, but Microsoft may have crucially missed what make the Wii so perfect for those new gamers whose main desire is nothing more than to pick up and play, rather than perfect.

A short note on the reactions to the other Kinect games on show: while ping-pong had occasional glitches or minor lag but was generally responsive, few people expressed such positive reactions to Kinect Adventures, where reports abounded of players not being recognised by Kinect at all and members of the watching crowd accidentally interfering with play. The mini-game on show was River Rush, a white-water rafting challenge to hit as many targets as possible before finishing the course. Kinect Joy Ride was better received, albeit without much enthusiasm for a return visit, with one person noting similarities to Wii launch title ExciteTruck, right down to the focus on boosting, stunts and long powerslides. The main complaint was that having to hold your arms up in the air for an entire race could be tiring, although had there been somewhere to play sitting down, this probably wouldn't have been an issue. The greatest success for Kinect by far was for Dance Central, which drew the biggest crowds and (judging by the big screen behind the dancers) was nigh-on flawlessly responsive. That it was the only Kinect game to have the camera facing away from the crowd may have had something to do with this, although that's not to dampen the achievement of a game which genuinely seemed to be enjoyed by everyone.
_____________________________________________________________________________

Thanks for reading! Tomorrow's games will be Kirby's Epic Yarn, Platinum Games' utterly bonkers shooter Vanquish and Enslaved: Odyssey To The West. Any comments or suggestions are much appreciated.
#Community    #Industryevents
Login to vote this up!

I'm a 26-year old English writer, formerly known on the CBlogs as Xanda�a. I've been an avid gamer since I was a wee lad, gripping a NES controller in my hands and comprehensively failing to get past those infuriating Hammer Bros on Level 8-3 of Super Mario Bros. I've stuck with Nintendo since then (not for any animosity towards the other console makers of course - Nintendo just make games I enjoy and have grown up with), apart from a brief sojourn with a Sony PlayStation, several woeful attempts to play Half-Life 2 using a laptop touchpad and sporadically wrangling a turn on my sister's beloved Sega Saturn.