4:48 AM on 09.30.2010 (server time)    0
I've been going to a lot of press events lately with Hamza, which is pretty cool because if he wasn't around, I probably wouldn't have any idea what I was supposed to be doing, and also, he's a self-proclaimed shark. And sharks, as we all know, are basically F-16 Jet Fighters of the sea.

The other day, we went to a press event for Homefront. This was a good thing because it meant we ate tiny hamburgers and played video games for several hours. However, it was held way the hell up in the Presidio, which made it tricky.

If you're unfamiliar with San Francisco, the Presidio is like forest that someone decided to build a fort in. And then they got sick of the fort, and replaced it with a bunch of offices. That's where Lucasfilm, Lucasarts, and Industrial Light & Magic are based. I'm told there's also a Disney Museum there, which I really don't care about since I still haven't gotten any money from A Goofy Movie, which is bullshit since it's a total ripoff of my life. The Presidio is gorgeous and amazing, it's just not something you can get to with a public transit pass.

Anyway, since it's sort of tricky to get up to the Presidio without the help of specially trained giant birds or an automobile, THQ had chartered a bus, and we were to meet in front of a hotel downtown to catch this bus. I was running late, and was very sweaty because I live in the frigid, depressing corner of San Francisco, and nobody ever tells me when it's actually a nice day out.

I showed up, worried I was going to miss my ride, and I saw a large, very nice bus. I asked the driver if this was bus going to the THQ press event, and he did that thing where he answers a question that's similar to the one I asked, but didn't quite answer my actual question. I think he said something to the effect of "We're leaving in a few minutes, going to the Golden Gate Club" but I didn't hear him entirely, and I was frazzled anyway.

So, I texted Hamza, and the following sequence of events occurred: 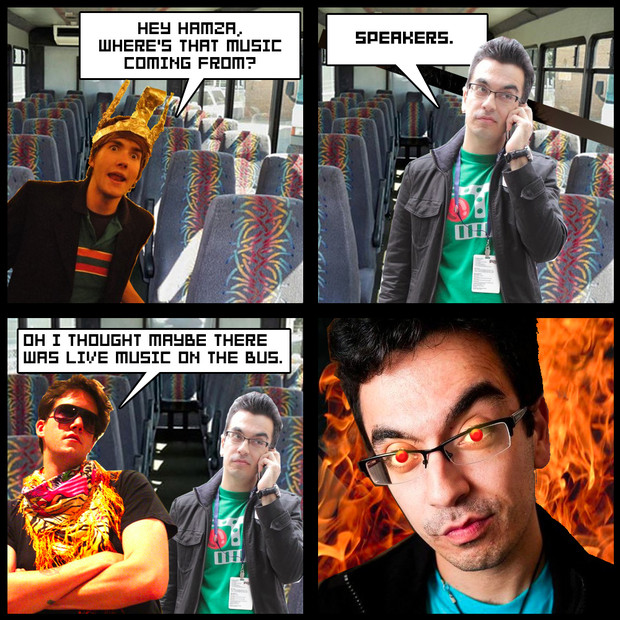 We wound up laughing about Hamza's second utterly blunt and generally baffling response to a question. I'm not sure if these situations were actually funny, or if was just early symptoms of heatstroke coupled with chronic exhaustion, but either way: I'm still really tired and that's why I made these idiotic little comics.

I've been meaning to update this precious little waste of a blog more often, but I've been busy making videos. That's my title now, I think: Video Producer.

This means I can tell girls that I'm a producer, which is sort of like the male equivalent of when girls say that they model. There's this immediate association with glamourous successful members of these fields, but face it: AM talk radio has producers, and Sears catalogs have models.

That being said, I'm stoked to tell people I work for "Destructoid." It's almost as good as earlier today when I walked up to the concierge of a very ritzy hotel and told him I was here for the Earth Defense Force meeting. There was that momentary glimmer in his eye of unadulterated admiration and envy, but it was quickly replaced with a look of "There is a crazy person in my hotel who thinks he is from space and I need be extra polite or he will eviscerate me and smoke meth out of my corpse."

I wanted to add that I really appreciate the comments you guys've been leaving. If there's anything you want me to write about, make a video about, or whatever, let me know. I'll try and make it entertaining. Ask me stupid questions and I'll go into rambling, pointless stories even less coherent than the one I just wrote.
#Community    #Industryevents
Login to vote this up!