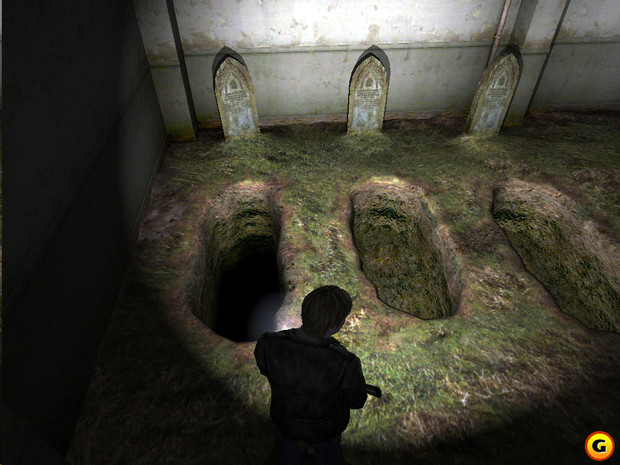 You may be right to an extent. Most movies from the Horror genre do portray scary, or at least eerie images and music. But I want you to go out (or online) right now, acquire any of these movies soundtracks and listen to those very tracks which scared the crap out of you without watching the movie. Except for maybe a few (Alfred Hitchcock's famous Psycho soundtrack comes to mind here) exceptions, the music alone just won't affect you as much as it did when it was attached to its visual counterpart. The same can be said of most horror video games.

Now go and acquire one of Mr. Yamaoka's Silent Hill soundtracks (preferably from Silent Hill 1 through 3) and I want you to imagine you're chewing some delicious candy while picking flowers from a beautiful rose garden or imagine you're in some kind of an exclusive "single gamers only" party where you're the only guy. And you're banging a Playboy bunny... or whatever else that makes you tick. Now pop in the Silent Hill soundtrack you have just acquired. Do you feel the difference? Are you nervously peeking over your shoulder yet?

I don't think Mr. Yamaoka wants to impress people (although he unintentionally ends up doing it anyway). He wants to crank the volume of the noises you THINK you hear to up 11.

The screaming of monsters and clanking of pipes can only take you so far, but we have all more or less had the experience of THINKING we heard something really creepy when everybody else denies hearing anything particular at that moment. That's your subconscious fear talking. That's what Yamaoka is trying to bring to the forefront rather than let it linger aimlessly in the back of your head.

Of course I'm not saying all horror OST should be like this. There's a time and place for everything. But there are very few Franchises (video game or otherwise) whose soundtracks are part of their identities and Silent Hill is one of them. That's what Akira Yamaoka and Silent Hill are all about. They define each other. Each and every Silent Hill game has its own mood, its own sounds.


On an end note, I'm going to show you that he is not just a one trick pony. He can also make quite beautiful melodies which brings fond memories to all Silent Hill fans. Here's an example from the latest Silent Hill game dubbed: "Shattered Memories" which is quite a good game. As close as western developers have come to realizing the core of Team Silent's much-loved franchise.