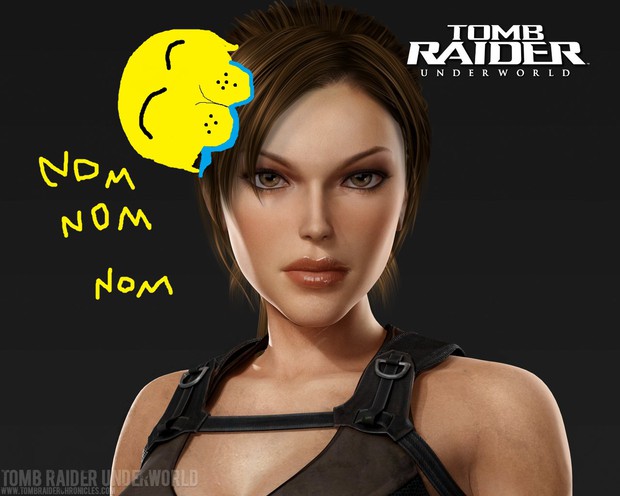 Tomb Raider Underworld is currently the last game which is actually named "Tomb Raider". I bought it a week ago from the bargain bin and since I'd been a big TR fan I thought I'd give it a try. I knew Crystal Dynamics had properly refined the platforming formula so that it may be much easier to do jumps and perform the graceful acrobatic feats of Ms. Croft. Unfortunately, I think I was both right and wrong.
You see, Tomb Raider Anniversary and Tomb Raider Legend were awesome games. They made me forget the shit that the TR series had become with *shivers* Angel of Darkness. The controls had become tight, it wasn't like trying to control one of the first Resident Evil characters anymore. The graphics were blissfully upgraded to the industry standards (almost) and Lara's new look had not only retained the usual hotness (Read: Double "D"s FTW) but the more innocent look on her face was a godsend compared to the dark halfway "goth" she had become with AOD. And also, the diving suit? Pure godsend heavenly bliss. I spent about 5 hours in the first level just experimenting with her "thong Physics".
So you may ask just WTF is wrong with Underworld that makes me feel like it's the next bad thing after AOD? well, it's the fact that the levels just weren't designed for the Lara we know from the last two games. The levels of this game required more precision, more versatility and a better camera. 70% of the time Lara wasn't doing what I intended her to do because the camera freaked out on me before the jumps and caused Lara to hurl herself towards spiky pits and poisonous lakes of... neon blue poison. I just felt I had no control of Lara more than my luck did. It became infuriating. Real fast.
Also, the levels here are HUGE. You have to solve several little puzzles scattered in a big themed environment in order to be able to tackle the "main" puzzle and while this has worked for several other adventure-type games, it just doesn't cut it here. There's no map here (No, the Sonar is not a freakin' map it's a useless piece of crap which confuses you even more) and you have to follow your intuition to decide exactly what you have to do next. There's a hint system which allows you to hear what Lara thinks of what should be done next and a second one which practically dictates what you have to do next like you're having some kind of a reader program reading a GameFAQS walkthrough to you out loud. But sometimes even they confused me or just didn't give me a clue as to what to do next. For example, after picking up some key items from the bottom of a jungle pit, I knew I had to "get back to an earlier part of the level in order to use the items I just picked up" but I didn't know how to get back up from the bottom of the damn pit and the game's hints didn't do much to help. I was finally forced to just run around like a little crazy bitch and find some kind of a different texture on the walls which indicated that Lara could climb up it.
Granted, most of the times the hint system does its job well and I guess I'm asking too much but I have to admit that if it weren't for my huge experience of Tomb Raider games and having an idea of how Tomb Raider levels usually work, I'd be long lost in frustrating mazes which gave no clue as to where to go next. Although it's not as complex as it sounds but the level design is this game's enemy. The puzzles aren't puzzles anymore when you know exactly what to do but you can't do it the way you think it has to be done and you have to solve it the way the designer intended it to be solved. This is more true during the last level and its end boss which are just big clusterfucks that would drive a casual gamer to go mad. And I shall only suffice to say that I wanted to murder the game's camera so bad I could feel its blood on my tongue. It just constantly reminded me of the nightmare that The Angel Of Darkness had become.
So once again, to my pure sadness, Lara seemed too old for the industry standards. I think Lara Croft: The Guardian of Light is a very good step in the right direction for the beloved heroin. I'm not saying the platforming, third-person Lara is dead but I'd rather wait a bit and see her (and her lovely breasts) in good hands rather than see another stab in her reputation.
For now, I can only credit Tomb Raider: Underworld for being the Tomb Raider game which featured the hottest Lara Croft ever depicted.
#Community    #reviews
Login to vote this up!