4:41 PM on 09.18.2010 (server time)    0
Dag yo! So, in one of my very first collector’s blogs, someone commented that my collection would never be “complete” unless I had an arcade machine . . . Well, it looks like I may have well “completed” it then! ^_^ I’ve been keeping this A Compulsive Collector’s Haul under wraps for a number of months, until I decided I was fully happy with the minor changes/modifications I made, but the time has come to unleash the awesome of the X-Men Arcade Game! 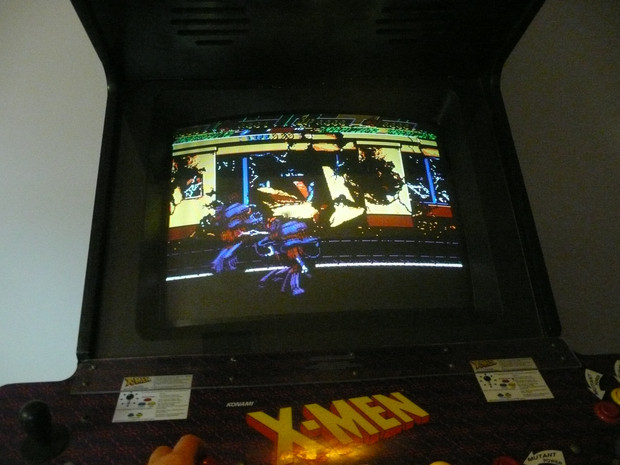 A blurry and shaky picture taken of me playing as Nightcrawler! Awww yeah!

So, besides possumwrangler, the only other people that have known about this/played this have been: Zoel, sylphx, and ScottyG! Many thanks go out to them for keeping it under wraps.

Now some of you may be thinking to yourselves about how much did I spend on this thing? I’m not sure how many of you are familiar with the prices of arcade machines, but for one like this, about $1,000 would be the normal going rate. If you were to get it for $500, it would normally be considered a “steal.” Guess what your thrifty deal seeking compulsive collector got this kickass thing for . . . just guess . . .

Yeah, that’s right! A nice cool $100! The way I look at it, I got a TV and a full arcade game for less than any of the current generation consoles, a DS or DSi, a PSP or PSP Go, or even some of the higher end collector’s editions. You know what I have to say to that? AWWWWWWWWWWWWWWWWW YEAHHHHHHHHHHHHHH!!! I actually went on Kijiji and they had a featured ad for an auction for a bunch of old arcade machines. Well, I went with my brother and they started the bidding off at like $750 and quickly brought it down to the $75 - $150 range, and we quickly jumped on this one. There were other ones like In The Hunt, Soul Edge, and a few others as well. So yeah, I got this bad boy for $100 and am quite a happy camper. It’s too bad I can’t find the receipt for it, since I would’ve framed it and put it by the machine! Now if only more Dtoiders lived by me, my already awesome setup for a NARP would be even better now . . . *sigh* . . . -_-‘ Hahaha!

Well, that does it for another edition of A Compulsive Collector’s Haul! I hope you enjoyed your double dose for this weekend! I’m still debating whether to do my comprehensive look back at PAX next or my PAX haul, but we’ll see. Until next time, latez mates!
#Community
Login to vote this up!