8:52 AM on 09.18.2010 (server time)    0
Even when I received my pass in the post, I still couldn�t believe I was actually going to PAX. I felt something would go wrong; like I�d be turned away from US Customs for having a beard or something. So after saying bye to my mum and dad, I boarded my plane from Glasgow to Philly, then to Seattle.

When I arrived in Seattle, I was greeted by Storyr, Suffocat, bleachboy and Solgrim at the airport. Despite the fact it was pissing it down raining we made good progress back to Storyr�s place, just outside Tacoma. Everyone was really nice, and after some pizza we sat down and watched Black Dynamite and also played some You�re In The Movies (see Suffocat�s Facebook page for a crazy video starring Storyr�s arse). I was dead tired, so much so I couldn�t keep my eyes open playing the Scott Pilgrim game with the guys. I crashed out, strangely in Storyr�s parent�s bed. Thankfully, they were not present in the house at that time.

A groggy start welcomed me to my first full day in the US. After some fumbling about, all of us got ready and headed out to do some shopping. First stop was a clothing store where we were looking for clothing to complete Suffocat�s sax man cosplay. What we did find were some Brutal Legend boxer shorts! Then it was onto a costume store to find an inflatable sax. Sadly there was none, but there were plenty of costumes for Solgrim to dress up in.

We got some groceries and Storyr treated us to some grilling skills. We had a cool evening, culminating in watching The Room: if you don�t know what that is, let me elaborate. It�s the cinematic equivalent of having someone vomit in your face. It�s a terrible, terrible movie only made bearable by watching it in company and by playing the drinking game. We also had some fun playing You�re In The Movies, with a guest appearance by Storyr�s arse. It�s a fun game, but I think that a Kinnect version would be even better. We all headed to bed in readiness of tomorrow�s trip to Seattle. 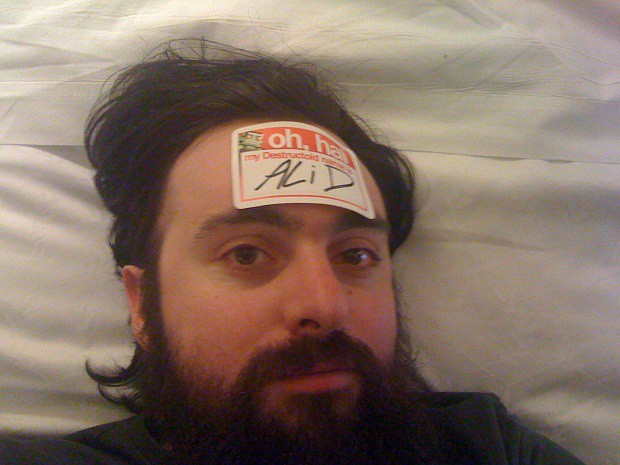 Storyr - Massive props goes to Storyr for letting both myself, Suffocat, bleachboy and Solgrim stay at his place. It was great to arrive in the US a couple days earlier and help get over my jetlag. We all had a blast man! Thank you.

Icarus - Josh did a great job at organising a room for us at the Sheraton.
Solgrim and Changston - both these guys shared a room with myself and Icarus and we had a great time. Changston was a little late, but he brought some amazing bacon brownies that wowed everyone. He�s also a top notch dancer and an all round awesome dude. Solgrim: the man, the legend. We�d been staying at Storyr�s place for a couple of days, so we were already familiar but after a couple days sharing a hotel room, we became firm buddies. This guy knows how to rock a party and is the friendliest, nicest drunk you could ever hope to meet.

Public Access Destructoid - You guys rock; meeting Jon Carnage, Venom and the lovely Cierra was a total blast. Carnage is like some kind of deranged crazy guy, wrapped in the shell of an awesome dude. We swapped crappy movie recommendations and shot the shit for ages on Sunday night. I look forward to sending you some crazy vids that I find in the future.

Hamza - you da man. Man. I had a blast at PAX and I want to thanks you for organising some great things at PAX.

Niero - I wouldn�t ever have gone to PAX and had this amazing time if it wasn�t for you. Thanks dude. Also, your hair is amazing.

Tactix - dude, it was superb to meet you. The sushi on Sunday night was a great time and many laughs were had by all.

Scotty G, Funktastic, Elsa, Mongoose, Dexter 345, Sean Caret, Walrusmustache, Johnny Viral..... there�s too many Dtoiders to mention.... I hope I see you soon. If I didn�t meet you or introduce myself, then I will make up for it next year.

Azereki and Hope - that three hour wait was worth it!

Pew, Hollie, Justice, Mikey, Anus and Halfie - you Dtoid UK guys are awesome. Next time I�m back home I�m giving you guys a shoutout for some NARP loving.

Aubrey and Geoff @ Soutpeak games - great meeting you guys, Battle Chess looks like a lot of fun and hopefully we can catch up at PAX again.