I'm finally here: the last of my PAX 2010 posts, and with TGS now soaking in the spotlight, it's just as well. I'm sure you'd all rather read about Shadows of the Damned than old news like PAX. But hey, I've saved some games that lots of you care about for last: the ones with the big crowds and the long lines. 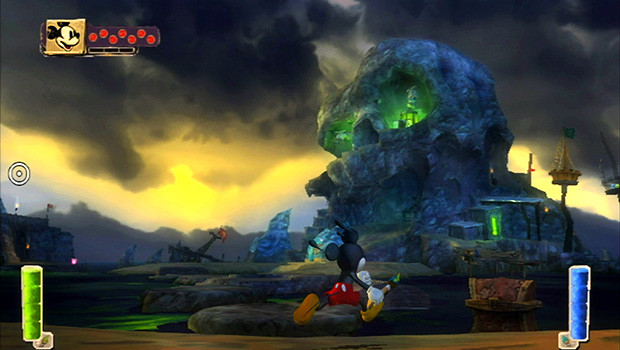 As it turns out, the people in that line at the Epic Mickey booth were waiting for what was easily the coolest piece of swag that anyone was giving out on the show floor. Noelani's reward for waiting in that 45-minute line was that one of two Disney artists drew an original drawing of any classic Disney character that she wanted, and she could take that drawing home with her. People were walking away from that line with drawings of Mickey in a pirate hat, Donald Duck, and even the newly resurrected character, Oswald the Lucky Rabbit.

Noelani originally wanted a drawing of demented, brainless Mickey from the cartoon Runaway Brain, but the artist actually didn't remember how to draw it. (Also, Runaway Brain is a great short animation if you've never seen it.) So instead, Noelani asked the artist what his childhood was like, to which he replied that he had grown up on an Amish farm. As a result, she asked for a drawing of an Amish Mickey, which I immediately assumed was from Mickey and the Beanstalk when I first laid my eyes on it. Weirdly enough, Noelani's actually never seen that cartoon, even though I have it at home on VHS. We'll probably watch it together sometime.