Why I'm excited about a game with Avatars in it again 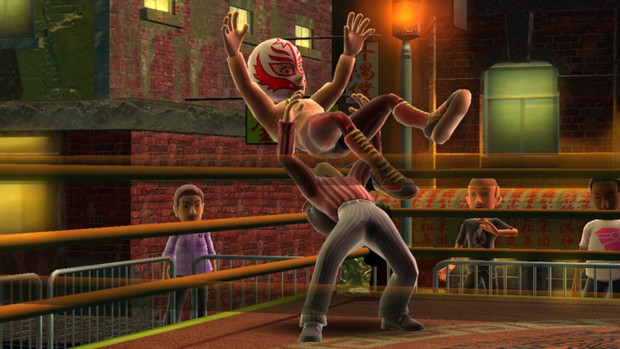 For TGS, most people will walk away with excitement over Gran Turismo 5 or The Last Guardian or Catherine or the new Castlevania or whatever else tickles their fancy. But for me, one game's already kind of stolen the show, and it's not one I even saw coming: a new Fire Pro Wrestling title from Microsoft and Spike that makes use of the Avatars on Xbox Live. And result, I'm suddenly excited a bit about a game that uses Avatars again.

I say again because, honestly, the only other time I've been excited was for the now-defunct 1 vs. 100, a game that was fun to play with other people and because I tended to do pretty well at it. I had been down on them before that game came out and actually took a liking to using them for the virtual game show, but since then, nothing's really made me think they're being used in a good way.

If you're unfamiliar with Fire Pro, here's a video recapping a bit of what it's about. Keep the volume off, since it's crappy Linkin Park music, but this is the only video to cover the entire franchise up until about 2 hours ago:

You'll probably notice, the games are all in 2-D. This was something Spike continued to choose to do, even though 3-D games were possible and they did release 3-D wrestling games that were not part of this series. But what makes Fire Pro so different is that the grapple system is all about strategy and timing, not just button-mashing; the comprehensive edit mode; and the huge roster of wrestlers across many different styles. It's the only game where you can really see the difference between Mexico's lucha libre, Japan's puroresu and North American-style wrestling all in the same ring, as the WWE Smackdown series and the like are often featured far more limited movesets and personality styles.

But the inclusions of Avatars fits well with this game. Past Fire Pro games had high levels of customization, and I'm sure with the Xbox Avatar engine, we'll have quite a few options. Hopefully, not ones we'll have to pay for, though!

But more importantly, it provides an actual use for the Avatars like Miis in Wii Sports. No longer is the Avatar simply standing there, but he or she is actively in the ring, throwing punches, putting people in armbars and delivering devastating piledrivers onto Avatars of your friends. Basically, imagine Wii Sports, but with pro wrestling as one of the games. I know I would have liked that, even if it wasn't super-realistic looking.

Of course, this could all be for nothing, as the game's only confirmed for Japan right now. But Spike and Microsoft, knowing there's an audience here in the U.S. that would be receptive and needing to give Avatars a first-party use with 1 vs. 100's cancellation, would be dumb to pass up the opportunity to bring this across the Pacific. And I, for one, can't wait to start dropping my Xbox Live friends on their heads as Super Tiger King. I just hope we can dress our little guys up in something awesome.
#Community    #Xbox360
Login to vote this up!