PAX 2010: The Gameworks Across the Street 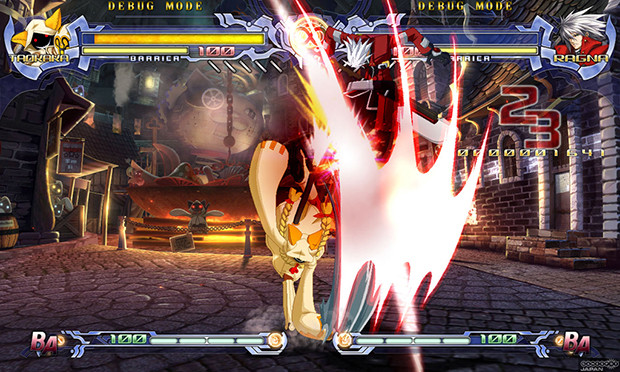 Now a ton of people I know really like BlazBlue, and even though I've only played it two or three times ever, I decided to throw down some credits so Noelani and I could play it just because it was pretty. Noelani's got an eye for animation as well, so I thought it'd be something that she and I would like. But unfortunately, BlazBlue sucks. It doesn't just kind of suck, it really sucks. I'm sorry guys, but no matter how high-resolution the graphics are, we both had a horrible time actually playing it. Again, sorry if you're a fan, but we both hated that game. I needed a palate cleanser fighting game after that one.

The King of Fighters XII cabinet was in use, so I didn't get to play a game of that, but rightly so. KOFXII is an excellent, overlooked game that might have been heralded as the best in the series if it only had more characters and good online. And I mean that whole-heartedly: a 3-vs-3 game needs at least 34 characters to keep from getting stale. But I completely love the KOFXII system: the dark shading and weight of the the character's movement, the pause and zoom when you hammer home a critical counter, and the sound of every hit just make the game feel good to play, even if you don't really know what you're doing. But instead of playing that, I was luckily able to pick up a game of 3rd Strike against someone at another cabinet, and we went 2 and 2 before he took the third match and beat me, despite the fact that I was using a lot of normals. The timing on Makoto's Karakusa into HP into Hayate is tougher than I remember, so I wasn't playing very well, but my fingers just love the way that 3rd Strike feels. The collision and hit-detection in 3rd Strike feels better to me than even current fighting games now.

There were so many games there (yay Raiden Fighters!), and it's not even the biggest Gameworks I've been to. So yeah, if you're ever in Seattle, possibly during next year's PAX, make sure to spend some time at the Gameworks across the street, and make doubly sure to play some weird games you've never heard of. I think you'll have a good time.