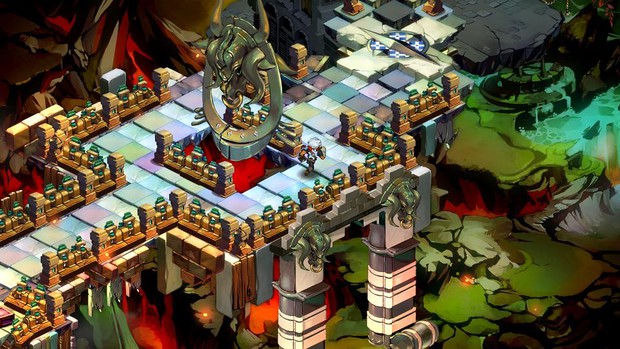 Bastion is an action-RPG starring a white-haired kid known only as "The Kid." It follows his journey to the Bastion, in order to rebuild the world that has been mysteriously torn asunder. The narrator specifically details that what precisely happened is muddled, with the line, "Proper story's supposed to start at the beginning. Ain't so simple with this one."

Speaking of the narrator, he plays a significant role in the game. He details what The Kid is doing, as the player is going through the actions. It gives Bastion a unique feel, as if it were a novel that has been brought to life with lush visuals and music.

As far as the visuals go, Bastion contains some of the most beautiful graphics ever seen in gaming. The environments are hand drawn and reminiscent of those seen in Vanillaware titles such as Odin Sphere or Muramasa: the Demon Blade. Elements of the world are constantly rebuilding themselves around The Kid, which puts an emphasis on exploration, as certain destinations are unclear until the player nears them. The Kid himself is cel-shaded, but done so well that it's initially difficult to differentiate his polygonal body from a set of well done sprites. It seems an exaggeration to say it, but Bastion may very well be the best looking videogame ever.

The gameplay itself is solid, with the player finding melee weapons, ranged weapons, and defensive items pretty early into the demo. Combat is smooth, and requires a bit more patience and skill than simple button mashing. The build shown at PAX hinted at more gameplay than combat and fetch quests, with a range of possibilities open for areas further into the game. More details are bound to emerge as Bastion's release nears, but there is unfortunately still about a year until the full game sees the light of day. Until then, all there is to do is wait.

So what do you think? Did you get to play the PAX 10 games? Is my ranking totally wrong? Do I just suck at platformers, which is why Super Meat Boy ended up in third? Sound off in the comments!
#Community
Login to vote this up!