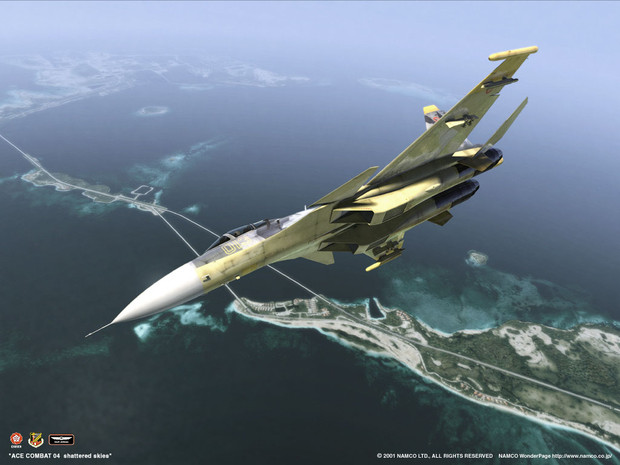 "When asking friends for game recommendations, I've yet to have anyone suggest a game to me for the sole reason that the sound/music is stunning." - Jonathan Ross, in this month's Monthly Musing post.

When I read that quote, I began to think Jonathan was right. When was the last time I'd given such a recommendation? When was the last time I'd heard one? I couldn't think of an actual answer to either. But those words inspired me to seek out a game I didn't think Jonathan would ever play, based on what I knew about his gaming tastes from my time in Destructoid's community.

Truthfully, it took me all of 10 minutes to figure something out, a game that's still one of my favorites and one I'm not sure anyone on Dtoid's staff except Josh Tolentino has played, and that's only because we are both fans of the same franchise. It's a game where the soundtrack means everything, a game I never would have fallen in love with had it not had such beautiful music, a game in a franchise noted for both its action and its music.

JRo, you ask, I respond. And my answer is Ace Combat 04: Shattered Skies.

Ace Combat 04 was the game that actually got me to buy a PS2. Sounds odd, but it's totally true. And a large part of that came not from flying the missions, but the soundtrack itself, which I consider one of the five best-fitting soundtracks to any game ever.

Many if not all of the songs in Ace Combat 04 were chiefly composed and arranged by the duo of Keiki Kobayashi and Tetsukazu Nakanishi. Kobayashi's first soundtrack for Namco was working on the one for Ace Combat 04, while Nakanishi's been with Namco since the early 1990s. Together, their collaborative teamwork, along with the other members of the Ace Combat music staff, has put together a soundtrack that takes you along for the ride and, combined with the in-game sounds, draws out the right emotions at the right times.

For most missions, though, it's the music that sets the tone. So let's take a look at a few examples:

Helpfully, most of the game's tracks are named after the missions they're used for, such as Mission 3, "Northern Eye". As you may notice, the song has some elements of, or appears to emulate, eastern European music a bit. That's fitting, since the mission takes you across a vast, frozen mountain landscape, not unlike what you might see in someplace like Siberia.

One of the most underrated songs in the game comes in the fourth mission, "Blockade." The mission puts Mobius 1 above the skies, tasked with taking out E767s that are jamming friendly radar. What's fantastic about it, truthfully, is that the song's rhythm stands out: it is, by my estimation, the only song I've ever heard in a video game in 7/8 time. It also has that light tinge in the background of xylophone amongst the high notes of the violins, kind of giving it a floating through the clouds feel, only to have the bass underscore it at various points as a reminder that, hey, you've got enemies to go shoot down, buddy.

"Stonehenge's Attack" of course, plays during the first time you run into Stonehenge, during the end of Mission 7. It has this pulsing, frantic pace that not only sounds tense, but the beats in the background seem to almost fit right in with Stonehenge's massive railgun blasts, threatening to blow you out of the sky if you traverse higher than 2,000 feet. Did I also mention that you're doing all this while flying through a canyon? Because you are, and just when you don't need to feel any more rushed, this song comes on, with its haunting strings and booming bass, and tells you that you'd better get out of there. Fast.

Mission 8, "Shattered Skies," has a fitting theme as well in "Comona". The entire level is predicated around defending a rocket that's about to launch into space with a satellite, a rocket the Erusians want destroyed. Essentially, it's one massive dogfight in the air, weaving through Yellow Squadron members and MiGs that are darting across the sky. The heavy rock orientation and massive chords of this piece, along with the quick tempo, really get my adrenaline pumping every time and desn't let go until I'm being debriefed. Can't ask for anything more fitting.

The icing on the cake, though, comes right at the game's climax, the point the entire storyline has been building up to: Mission 15, "Emancipation." This is not only the best song in the game, in my humble opinion, but it's also the most fitting. And with the in-game chatter, it goes from simply being a fitting song to being an absolute masterpiece. You can listen to the song alone here, but instead, I'm going to link to the actual game play so you can watch how it all flows together so well:

The mission here is to liberate the city of San Salvacion, which is the same city the narrator of the game's subplot lives in. Within the first 90 seconds, you can hear your teammates, speaking perhaps with a bit of nervousness and panic as they try to liberate the city and avoid enemy fire; the sounds of a local radio broadcast being picked up, reporting on what's going on above them and on what's happening below with the resistance, cutting out from time to time as the enemy censors try to stomp them out. They, too, are fighting for freedom, and all throughout the mission, you can hear how the tide is turning in your favor as you take out the enemy installations and free the city. Meanwhile, the level's theme plays in the background, giving off a feel of both hope and tension.

And then it all goes to shit. A heads-up from AWACS cuts the party short: Erusia is sending in not one, not two, but SIX Tu-160 supersonic bombers to level the city. And you have only minutes to catch them and shoot all six down. Even letting one through becomes failure. At this point, that bit of tension seems to amplify ten-fold, because those Tu-160s are closing in on their targets incredibly quickly and the people on the ground have no idea what's coming, no time to react if you don't stop them. The entire fate of this city is in YOUR hands, and the music lets you know that.

But of course, this wouldn't even be a proper feature on Ace Combat 04's music without me mentioning the one song just about everyone seems to know:

The music for the final mission, "Megalith": "Rex Tremendae" and "Megalith~Agnus Dei". If you're looking for more fitting music for a final mission that has you trying to take down a massive ICBM launcher with the ability to rain ruin down upon the entire world ... well, you'll be looking probably forever.

What makes the songs so fitting, first, happens to be their style. Both are full choral and orchestral pieces that give them the whole "this is the end and we've pulled out all the stops" feel. But dig deeper, and you'll see that underneath, these songs don't just paint a pretty picture for the dreary, storm-like skies or the massive assault on the Megalith complex. They help tell and reinforce the story itself. "Rex Tremendae" translated into English means "tremendous king," referring to the absolutely massive size of Megalith itself. "Agnus Dei" translates into "lamb of God" and yes, is a name sometimes given to Jesus Christ. It's a hint at not only Mobius 1's mission and possible sacrifice should he not make it back in one piece, but to that of every pilot and every member of the ground assault force sent in to gain access to the main bunker and stop the launch. That theme of sacrifice is further reinforced when you hear the transmissions from the ground force, hearing how team members have gone down as the survivors continue to solider on, willing to give everything to save the world from its destruction. Top top it all off, it does really give the mission a feel that everything hangs on this, which is highlighted by the actual operation name: "Operation Judgment Day".

I could, if asked, sit here and go through a mission-by-mission, track-by-track analysis of the Ace Combat 04 soundtrack and game. But it would all come back to one thing: the game's soundtrack is amazing and ties in directly to each mission in the game, playing with your emotions at exactly the right time and setting the mood sensationally. It's a game you should at least give a shot, even if you don't like flying planes too much, just because the music is so damn good and so damn fitting.

Or at least you should listen to the OST. Because even if the game lets you down, the music won't.
#Community    #OpinionEditorial
Login to vote this up!