Yup, the Dreamcast launched in America 11 years ago as of today. Happy birthday Dreamcast! Can you believe it's been that long? And it's not a big secret that SEGA's Dreamcast console is my favorite video game system of all time. Though maybe not for the most obvious reasons.

You see, I'm about to turn 22-years-old next month, so when the Dreamcast was released in 1999, I was in sixth grade. (Yup, I'm younger than I look. Also, Noelani is older than she looks.) So obviously, I didn't have a job, and after the Dreamcast died, games just fell to the floor in terms of their prices. So I would just go to my local game shop, and any game that anyone said was any good at all, I just picked it up. I bought Soul Calibur for $12, Jet Grind Radio for $6, Chu Chu Rocket for $5, and there was Grandia II, Tony Hawk's Pro Skater 2, Crazy Taxi, Virtua Tennis, and the list of great games that I bought for disgustingly cheap just goes on and on. I was only a middle/high school kid, and yet thanks to the Dreamcast dying so quickly, I was able to afford a large library of games that I really liked and was proud to own. 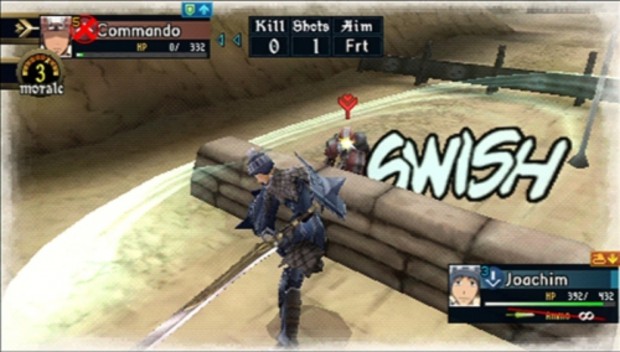 ...and as for Valkyria Chronicles 2, I think the game is already out, isn't it? As in, if you liked Valkyria Chronicles, then you could totally go buy the sequel right now! It wasn't too much different from the demo I played of the original game. And while I had some hands on time with one of the missions in the game, and I enjoyed what I played, I definitely won't be buying it because I don't own a PSP!

Not only that, but I've almost never used one either, so I didn't even know where the analog stick was on the thing. Luckily, the dude at the booth was really nice, and showed me the ropes of how to play the game. In fact, in general, all the people at the SEGA booth were great. One of them saw Noelani with her DS out and offered to give her the Sonic Colors DS demo, and one of them even took a picture of me since I was wearing a Sonic shirt on Saturday. Seriously, visiting the SEGA booth was a really pleasant experience, they've got Vanquish and Sonic Colors on the horizon, and they threw a big fan party at the Gameworks across the street. So despite everything, it seems like they're doing well these days. Thanks SEGA!