It was pretty cool.

Actually, it was one of the best experiences of my life, to be honest with you. I had so much fucking fun in and around the streets of Seattle. I got to take a picture with my big group of friends, play Space Oddity with a great group of fellas, see king3vbo almost naked, and get stalked by a creepy drunk guy (who a surprising lot of you ran into). It all made me realise how much I miss the Dtoid community. Sure, I stop by every once in a while (Tuesdays, to be exact). But I haven't posted a blog since *checks position of sun in sky* fucking June. I love you guys a hell of a lot more than that, and I feel like it's time to post some stuff. Which I will be doing at least once a week. What might said stuff be? Well...

I could write a supplement to a piece I wrote over at Nukezilla, my current JOURNALISM home. For instance:

I recently wrote a piece about my time with Comic Jumper, where I almost played the entire game because the full version was playable for all at the PAX show floor. You should really go check it out if you have the time. Something I wanted to add, though, was how much Twisted Pixel reminds me of Pixar. In case you didn't know, Pixar has a thing with recurring items and motifs, like the ball in Luxo Jr. (blue and yellow with a red star) that appears in every single one of their films (seriously, look it up sometime). Well, TP has started doing that with their games. In the first level of Comic Jumper a bunch of billboards are positioned in the background. These billboards advertise, among other things, Big Science Labs, which is apparently where all the 'Splosion Man testing was going on. There's another that looks like a military recruiting poster for the military-like beings in The Maw.

Interesting, right? I could also post an update on my somewhat credible underground child po...sorry, bead sprite job, like:

So I totally made this recently: 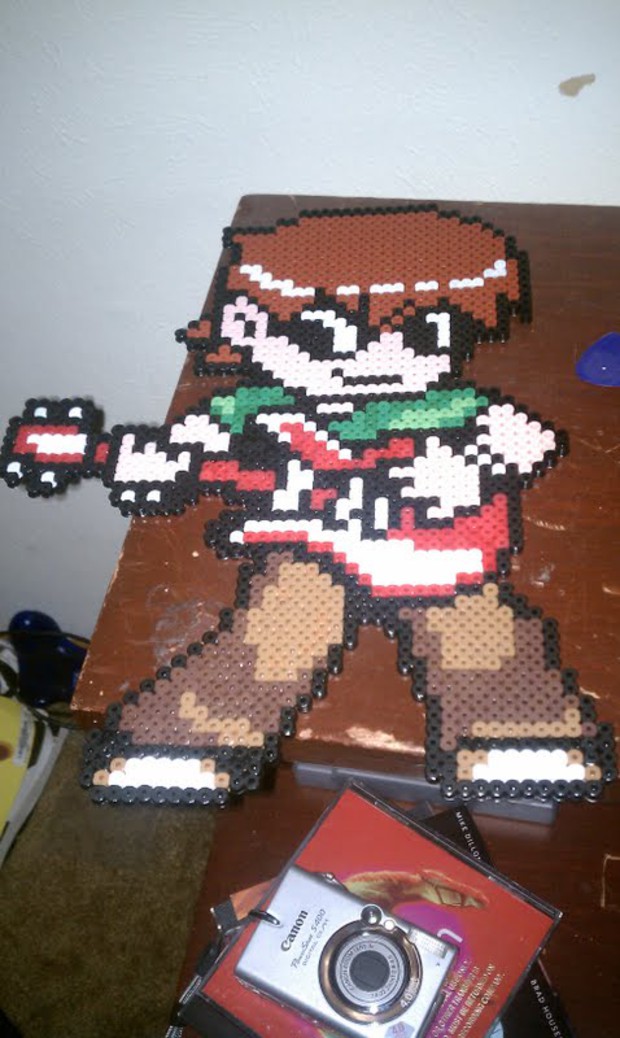 This is the biggest piece I've made so far. It's pretty fucking great, right? I had to basically pause the game, mid-animation, to attempt to pull this off. Then I did a basic internet search (which I should've fucking done in the first place) and found this couple who do fantastic bead sprite work, and followed the piece that they made. Looks great, right? If you'd like me to make you something like this/this thing exactly, please let me know through a DM or comment. I'd be happy to make anything your mind can imagine (for a small fee).

As Roll entered the boss doors, jumping through in a whimsical fashion that lifted her skirt a bit, her foe was just in range. Wood Man, the dastardly and deliriously devilish of the forest the young female robot had just battles hours to get through, was waiting. Saying this man had wood was an understatement: every piece of him was made from a strong oak. While this made him susceptible to heat, he contained a lust for the fairer sex that burned brighter than a thousand Solar Men. Roll knew that all of her sexual conquests up to know were only practice for Wood Man. She also knew that Fucking him was the only way to find out what happened to her brother Mega. As she stepped forward, letting her dress fall to the wayside, she gave the Wooden One a coquettish smile. They both knew what she was here to do. Finally, Roll sheepishly said "Do you have any protection?"

That's when the leaves started swirling around his penis.

Wow, that was hot. Anyway, that's the kind of shit I wanna bring back to the Cblogs. I hope you're ready for it. I sure as hell ain't.
#Community    #Rants
Login to vote this up!