The show floor at PAX is completely covered in game demos, so even if you burned all your money on a flight and hotel and you barely have enough to eat with, there's more than plenty of things to do at PAX, both on the show floor and off. And Noelani must think I'm some kind of masochistic maniac, because the two games that made me smile more than anything else involved me dying over and over and over with a 360 controller in my hands. 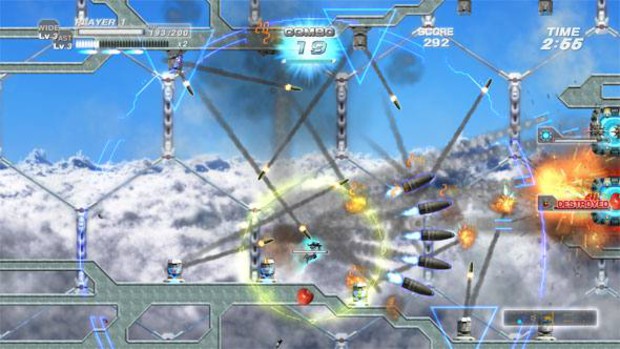 In general, fans of the Dreamcast version will be happy with the changes and fans of the DS version (like me) will be slightly disappointed by them. But my biggest disappointment is that EX Attacks can no longer be directed, and now are only omnidirectional. It makes them a lot less useful and, combined with the lack of selectable weapons, means that you'll be exploding a bit less than you did in the DS iteration.

Edit: According to Kotaku, you can direct EX Attacks with the right analog stick! (I kept trying to do it with the left stick.) I really hope they're right!

I know it sounds like I'm being down on the game because it seems worse than the DS version, but being slightly worse than an amazing game is still amazing. If I say that Cave Story is better than Super Metroid, that certainly doesn't mean that I dislike Super Metroid or that it's a bad game, and it's the same idea here. Despite my concerns, I still loved the hell out of Bangai-O HD.

But what really kept me hooked on it was when the representative at the booth tried to take me off of a certain level because he claimed that it "was gonna be rebalanced" and that he didn't think the developers had even beaten it yet... oh, it's on now. Now, I had to try and beat it. I was gonna beat it, and then this guy is gonna tell the dudes at Treasure about this crazy American kid who actually beat the level and I was gonna be the most awesome kid at PAX. Man, I played that damned level so many times... and I died many, many times.

But I know it wasn't impossible! I kept getting closer and closer to actually killing the massive hordes of enemies in the level and making my way through, and then I even came back the next day, I picked that same level, and I tried again and tried again.

And try as I did, I still died again and again. I love Bangai-O.


Bonus: If you want to read even more about Bangai-O HD, fellow LA Dtoider Alex Barbastis wrote a piece on it for SEGA Addicts, where he claims that "others who played the game felt more strongly than I," and I can't help but think that he's partially referring to me. I did kind of geek out about Bangai-O in front of Alex and Cadtalfryn. And I also stole the images from his article, so thanks for that!