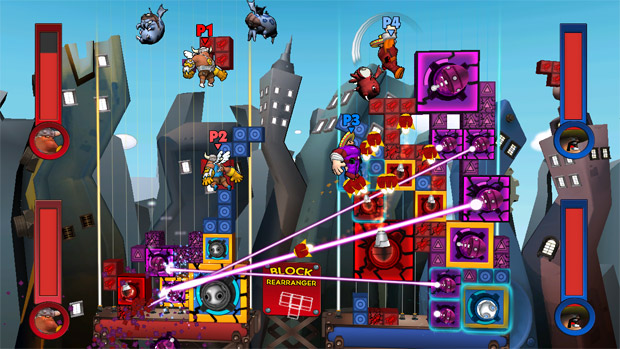 Right. So the next day, I got my hands on this Tetris-fighting game, which I found out is actually named Slam Bolt Scrappers. And as you would expect, it's pretty weird to play at first, but it's not as complicated as you would initially think.

So monsters float up at the top, and if you beat one up, you get a colored Tetris piece. The point of the game is to get your colored Tetris pieces to line up in 2x2 or 3x3 squares, after which they become laser turrets and such that can destroy your opponent's Tetris-piece-made tower. The concept is amazing, and the game, while confusing at first, is a whole ton of fun once you've got the idea. It takes an extremely familiar mechanic (Tetris) and then twists it around so much that it's almost reminiscent of Power Stone or Smash Bros., which is a great, great thing.

Perhaps the only issue I had with the game was that players could go to the other side of the board and directly beat up their opponents, but when I did, I couldn't really tell who was winning or what combination of the two attack buttons I should be pressing to beat people up. I would just kind of fly near them, and mash a button and hope that they took more damage than me. But even then, there were occasionally some power-ups (including a shield), which encouraged you to go to the other side and annoy the hell out of your opponent, so there might be more to that mechanic than I initially gathered. And hey, dying isn't even a big deal anyway, since you come back really quickly if you ace a quick-time event.

I've never actually heard of Fire Hose Games before, and I might have missed this had Niero not recommended it, so consider this post as me passing on his recommendation: Slam Bolt Scrappers is damned awesome game that you should definitely keep an eye on.


Edit: Adding in a gameplay video!