3:26 PM on 09.04.2010 (server time)    0
While a number of Dtoid UK members are off enjoying PAX and playing Duke Nukem Forever, Capcom UK held a small event at the Empire Casino in Leicester Square, London to showcase Dead Rising 2. Those of us who remained in Blighty made sure that the groups was represented so Wayne, Nik, Sebastian and myself went zombie hunting! 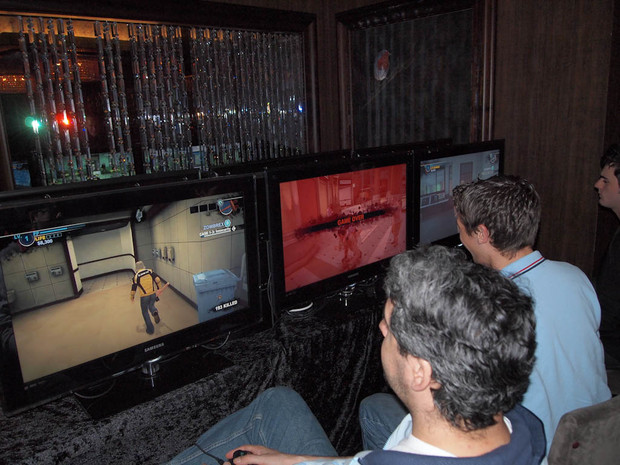 In terms of gameplay, Dead Rising 2 played very much like a "by the books" sequel. That is to say, more of the same. It felt very much like a more refined version of the original Dead Rising in a different settings. Sadly, while that meant that some of the good things about the first game were made better, the bad things also remained. Many were refined to be less of an issue, but still an issue nonetheless.
At this point, I should say that I was not a fan of the original Dead Rising. I felt that it served more as an interactive tech demo, showcasing what Capcom could do on the 360 rather than a fully fleshed game to be enjoyed. Frank West was like a tank to control, long range combat with guns was a joke, the survivor AI was terrible, the psychopaths were frustrating and the pacing was absolutely terrible with the game giving you either too much or too little time to get to missions.
In Dead Rising 2, Chuck is a little easier to control, which is a blessing, but still somewhat sluggish (the less said about the motorbike controls during the "Terror is Real" show the better!). Gun combat is still useless and the pacing is still off, although they are more lenient this time it would seem. Sadly, miss the time window for a story mission and you get an instant game over like before so be sure to save regularly and be prepared to sit around and waste time in a specific area to make sure you're there for the mission when it begins. Everything else is pretty much as you may remember from the original game or the recently released Case Zero DLC.
Loading times also deserve a mention because there are quite a few of them and they are rather long! Expect a fair few breaks in play as you wait for the next section to load up unless the game gets optimised a fair bit before release.

As for our main lead, Chuck Greene, he lacks the charm of Frank West and isn't as fun to watch in the cutscenes. He puts on a stoic look and that's pretty much him for all the sections of the game we played. His backstory makes him look more noble and commendable. In fact, on paper, we should be able to rally behind this single father looking after his daughter rather easily but once in the game, he's more 2-dimensional and wooden than Charisma Carpenter in the Expendables!

It's not all bad though! When you boil the game down to the lowest denominator, killing zombies, there's a lot of fun to be had. A new feature of Dead Rising 2 allows you to combine certain weapons to create some really interesting weapons, from the obvious nailbat to the more interesting "freezer bomb," dynamite strapped to a fire extinguisher to make a bomb which freezes zombies and makes them easy targets. Our personal favourite from within Dtoid UK was the "drill helmet," a bucket with 3 power drills stuck through to the insides. The attack involved putting the bucket on the zombies heads whereby the drills would start, we get lots of red on the screen and, soon after, a headless zombie!
Customising Chuck was also very easy and rather fun. My threads of choice was a James Bond style tuxedo with no shoes. One player managed to unlock an oversized Blanka mask and was running around in that. Others simply opted to have Chuck running around in only his boxers or ladies clothing.

To say that Dead Rising 2 is bad would be a disservice. This writeup may seem negative but the overall picture is that Dead Rising 2 is a solid and somewhat entertaining game which is bogged down with a number of issues which may be accepted as part and parcel of the experience, much like the fixed camera view for the original resident evil games. It just depends if you don't mind them of if you find them annoying.
Or in even shorter terms, if you liked the first game and/or case zero, you'll love Dead Rising 2! If you didn't, there isn't anything here which will change your mind.

On another note, while playing the PS3 version of the game, I came across something a little odd...

Note that this interesting bug remained even when I went into a new area which required loading and also going back to the title screen and loading up the most recent save didn't remove it!! The only thing we didn't try was to exit to the XMB and restart the game from scratch!
But in its defence, we also heard that someone experienced the same problem in the 360 version and my first play on the 360 game required me to go back to the dashboard and restart the game because it crashed. Let's hope Capcom fix that particular issue before the game is released. They can keep the frozen zombies in there though. That was quite funny!
#Community    #Industryevents
Login to vote this up!