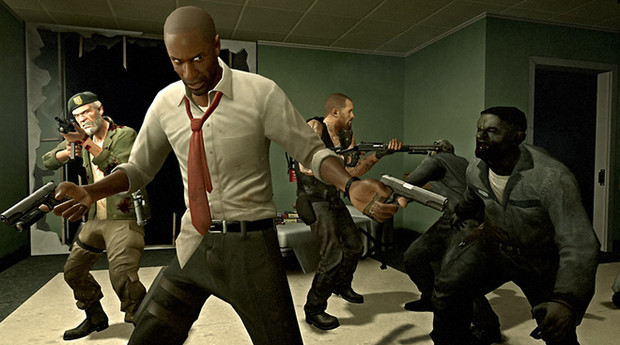 In that same way it's how Left 4 Dead works beautifully. Valve have constructed a game based upon team work on both ends of the spectrum but it's the use of the idea that these are infact "movies" that frees them up creatively. Instead of trying to tell a story of real people trying to survive a zombie apocalypse, which is what allows them at first to break some "realism" rules with the Special Infected, it meant they could beef up the presentation to better mirror a movie like experience. In the first game, which Valve has a commentary for they basically relay that music was very important to that experience, so that the use of environments and "The Director's" monitored progression, the music could help signify any trouble players would encounter.

It's now whenever I step into any game of Left 4 Dead and I hear those mischievous piano keys I know basically a Boomer is close. You become alert and need to keep your distance while you search out the source of the sounds because it's not only the keys, the Boomer blurps, blorps and even cries out in pained agony as if the body he inhabited was barely holding him together and most times when seen early one good shot is all it takes to burst him like a bubble.

The Smoker and Hunter have similar but different piano key musical cues to warn Survivors but it's the details in the use of sound effects like the coughing and weezing of the Smoker and the snarl of the Hunter that furthers the experience with each emitting different sounds due to various situations. The Witch has a chorus that much like a see saw goes up and down a scale, intensifying the closer you get to the Witch. It's literally a brilliant way to use music in a game. Another quick highlight for me is the shrill chorus you receive upon being covered in Boomer Bile (ie. Hunker down for the Horde) however none of that compares to The Tank.

The Tanks theme has come to signify for me personally a sense of heightened danger with pure adrenaline and really summarizes for me why I go back again and again to Left 4 Dead. It literally brings goosebumps on my arms in the heat of battle because it's become synonymous with battle and possible death in game. Out of the game the Tank's theme has made it's way into my stratosphere as a sense of foreboding in both serious and comical ways. When I sit down to watch a movie and something bad happens or more appropriately a giant monster is attacking the movie's protagonist, if I don't vocalize it I definitely have it playing in my head. It's something movies caught on to along time ago and Left 4 Dead highlights so well. Besides, what other game could provide such an appropriate ringtone for any number of Ex-Girlfriends out there, am I right?
#Community    #OpinionEditorial
Login to vote this up!