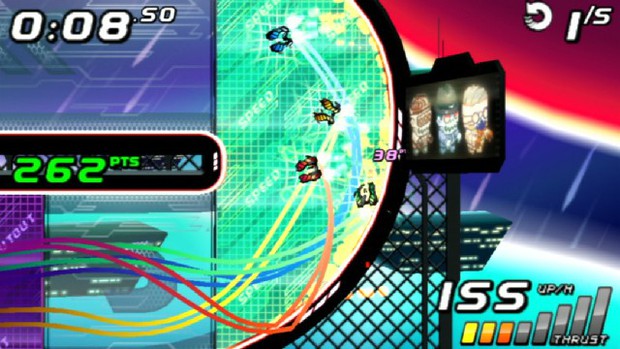 With little fanfare, Aero Racer was released last week as a PS3 Mini. Indeed, so little effort is being put into marketing this bite-sized gem that developer Halfbrick Studios makes no mention of it on its website. This may have to do with its status as a free downloadable for PlayStation Plus members, however for the rest of us, the going price is a paltry $2.99.

The idea behind PlayStation Minis is a noble one: offer small, simple titles at budget prices. Aero Racer takes that idea and runs with it. On its surface, it's a simple racing game, with one button for thrust, two directions to turn, and not much else. Despite its initial appearance of simplicity, Aero Racer ramps up in challenge pretty quickly. A lot can be said about making a compelling, deep game with controls that could have worked on the NES.

The racers drift a substantial amount, which is frustrating at first, until the player gets to understand why. The main conceit behind Aero Racer is that while thrusting against open air can get you where you want to go, thrusting against a wall will get you there faster. The introduces the idea of "grinding," where racers want to get as close to walls as possible, without hitting them.

It introduces an interesting risk/reward scenario, where skilled racers can speed around corners, assuming they can keep their vehicles right on the edge of disaster. Aero Racer capitalizes on this idea with tracks that have multiple paths; yet unlike any other racing game before it, the shortest route is typically not the fastest.

In addition to its minimalistic control scheme, the game also has an old school feel in terms of difficulty. It starts off easily enough, with tutorial levels allowing the player to get a feel for the floaty racers, but pretty quickly ramps up to asking the player to achieve a certain number of grind points and complete the track in a particular amount of time, which can be extremely taxing. However, many of the tracks last only ten to fifteen seconds each, so retrying one multiple times to get a perfect run isn't unreasonable.

Still, it takes a particular kind of person to enjoy a game like Aero Racer. It's fast, it's exhilarating, but more than anything else, it is challenging. If you miss the days of twitch action that requires precise player input for success, then you'll probably love it. If you prefer your downloadable games to be relaxing, mindless fun, you may want to look elsewhere.
#Community    #PS3
Login to vote this up!