Teh Bias: Making War and Love

7:25 AM on 08.17.2010 (server time)    0
I've long since disliked romantic subplots in my visual media. You know the ones I'm talking about. The only woman in the movie inevitably falls for and subsequently ends up snogging the musclebound, macho hero. Variations in theme, genre and the significance of said romance to the plot make surprisingly little difference; the relationship will fluctuate in a suitably dramatic way if the film demands it, but they always kiss and make up at the end anyway, a process I've always found slightly painful to watch. I've observed the pattern even in films that are supposed to be about romance.

I find these plots at the very least tiresome. They're predictable, samey, and usually add nothing to the film, in the case of the action movies I gravitate towards. A pretence at character development or relevance can be added by having the woman soften the hero's hardened heart somewhat, allowing him to make the right decision in Act Three, as if men are completely embittered or immoral if they're not in committed relationships.

I'm not saying that romance in movies shouldn't happen. The dynamic between Peck and Sosa in the new A-Team movie is great and adds a few extra tangles to the plot, for example, and Inception uses the complex history between Cobb and his wife to immense depth and effect. These relationships, however, stray a little outside the typical action movie love interest system, the latter more than the former, and for every Wash-and-Zoe, there's a Peter-Parker-and-Mary-Jane to turn your affections sour. 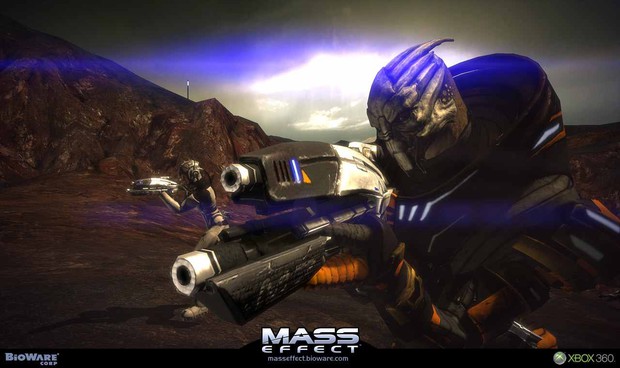 
To put it bluntly, this is genius. The game carefully crafts character development in a situation where you control your character's opinions and actions by appealing directly to you, the player. You make your plot-changing choices during the game based on your opinions of the situations and the characters involved, not because killing the puppies gives you 20% more gold. As an example (another white-text spoiler), I saved Wrex on Virmire because Shepard and I got on well with him in a weird sort of way, and I chose Kaidan over Ashley because Ashley's kind of a racist and Kaidan's just some guy who gets headaches and puts up with having a temperamental Spectre for a commanding officer but never complains. I decided Liara's affection for Shepard was mutually returned because the game had made me fond of her as well, to the point where I didn't want to upset her by refusing. You can't get audience involvement this deep in movies, or even novels; you just can't. When the game ended, I felt quite sad; sad that I wouldn't be able to continue adventuring the galaxy with my newfound friends (and alien love interest).

I guess there's always the DLC. And Mass Effect 2. I'm buying that ASAP.

So, there you have it: the tale of how Bioware overturned my preconceptions of romance in the fictional media, and made it relevant and engaging to me in a way I can safely say I've never experienced before through any medium. Who would've thought that watching a spaceborne secret agent falling in love with a blue monogendered psychic alien who temporarily disappeared every time I pressed the pause button could feel so... real?
#Community    #OpinionEditorial
Login to vote this up!