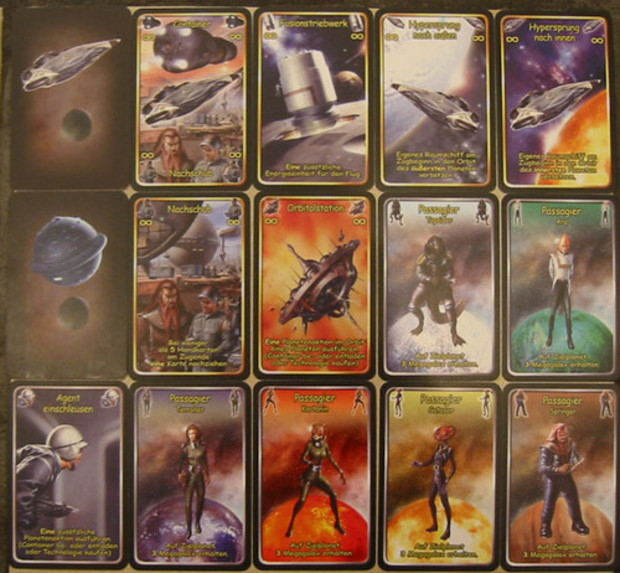 Intervention Actions, like Technologies, come from your deck and are often the much more aggressive cards. They do things like switching places with a player, switching cargo, delivering passengers, granting another flight/action, etc.

Once your turn is up, you can draw as many cards as your current replenishment value. Then the other player takes their turn. Game ends when 70 points have been achieved.

So that's how it plays, how is my response? On the plus side, it's a cheap two player game which is incredibly rare. Most games have special "two player" rules which equate either to removing pieces from the game entirely or force the players to take turns being a third. The theme is also something nowhere near as exploited as, say, fantasy.

On the minus, it seems like an unfair bitch in all honesty. I don't like how aggressive this game can be sometimes nor do I like how, unless you can snag an extra container or Replenishment token, you will have a long, hard fought battle in this game. Only being able to draw 1 card or haul 1 container is a handicap when your opponent has either of these, let alone both.

All in all, it's a quick 2 player game that might be handy to have around. There's nothing exceptional about this game but then again, it's nothing terrible either. If the theme grabs you, I siggest it. If for nothing else than to have something besides Race for the Galaxy to play in this genre.

Publisher: Z-Man Games
MSRP: $24.99
Players: 2
Complexity: 4 of 10
Time to Play: 20-30 minutes
Thanks goes to Boardgamegeek for the images.
#Community    #NOTvideogamesrelated
Login to vote this up!