2:51 PM on 08.10.2010 (server time)    0
The Year? 1989. The place? Southern Ontario. The person? 8 year old me. After moving from the bitter cold of Northern Manitoba, Ontario seemed like a wonderland. Gone was the 7 inches of snow. Here was Satellite Television. And best of all? No more losing G.I. Joe figures in the snow after performing mock funerals. Yep Ontario seemed to have it all...but nothing would prepare me for what happened next.

On a trip to buy furniture for our new home I discovered "Beat 'Em Ups".

I can describe it like it happened yesterday. Accompanying my parents into the Zellers through the glass entrance way, you could see the far end of the store and everything within the immediate vacinity of these two way, automatic doors. Upon entering however, a machine caught my eye to the far right exit. It was an Arcade machine, and upon the side of said machine were three figures, carrying weaponry the like I had never seen before. An amazon gripping a sword, boobage clear as day....calling my name. Another guy, gripping an Axe, bare chest gleaming in the light as he struck a pose of supreme bad-assery. Lastly was a Dwarf, beard as Golden as the Axe that protruded from his stubby fingers. Nay, I had not come upon some kind of weird erotic porno.....I had discovered the game that would change my nostalgia feelers forever.....I was formerly introduced to Golden Axe. 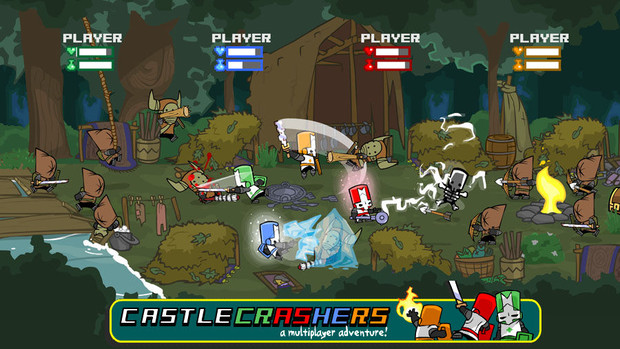 This is why thankfully we have companies like The Behemoth. The makers of Castle Crashers just totally get what the classics were all about. Side Scrolling goodness, and a pace and build up to the enemies. One of the best part about old school Beat 'Em Ups were little hints about the dangers ahead. In Double Dragon, the main boss would watch on as his goons punched the girl in the stomach and walked away thus alluding to a fight to come. In Castle Crashers, you see muscled up thugs run away with the Princesses in much the same fashion. In Golden Axe upon entering the final area, maggots crawl along the floor and eventually make up what would be the essence of Death Adder, creating an image of a larger than life bad ass that you now had to face. In Castle Crashers there's a tough looking guy that you're meant to think is the Boss, who gets crushed by a door as the "real" Boss enters the fight. All Classic stuff. All forgotten by everyone except one Developer.

So to the creators of The Warriors: Street Brawl, Watchmen: End Is Nigh and Golden Axe: Beast Rider....what were you guys thinking?....hey..wait a minute...those are all licensed games.......now things are starting to make a little more sense. The almighty dollar. Mucho Dinero.

Well for all those still reading this, will Scott Pilgrim BUCK the trend? ho ho ho.
#Community    #OpinionEditorial
Login to vote this up!