Another Ill Advised Foray Into the Fighting Game Genre

7:08 PM on 08.04.2010 (server time)    0
[Disclaimer: This blog does not represent the views or opinions of Enkido as he exists in a sane state and he cannot be held responsible for the content expressed in this article. For real, he doesn't know how to quit while he is woefully behind. Also, cocks.]

Back when Super Street Fighter IV was announced, it generated quite a substantial buzz here on Destructiod. So much so that I believed that I may be missing out on something entirely novel and enjoyable. Well, having none of that, I began my first foray into the fighting game genre. In retrospect, it would have probably been a good idea to have made my entrance quietly and with as little bravado as possible.


Such tact would have given myself time to learn the basic mechanics of a fighter (based on real life experience I would have to go with shouting loudly and grandstanding), learn my play style, pick a character fitting such a style, practice, and generally do what is required to make myself appear more competent than a stroke victim with no thumbs. As you may be able to imagine I would have none of that as well. Instead, I signed up for the PS3 Ranbat, picked a mustachioed English pugilist as my character and slogged through my first couple of arcade matches, failing to make it through the story. I was off to a great start. 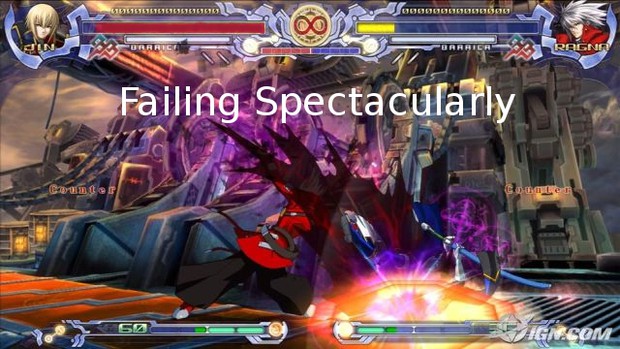 Now I'm starting to get into BlazBlue and I must say I am really enjoying it, more so than SSFIV if I'm honest. I recently finished my summer class, which means that I have time to play games after work again. Also, I finally finished my week long hell moonwalk across the broken glass strewn trail of tears that is the final ten levels of Valor in MAG and I'm back in Raven (play with us sometime), so I have time to devote to this drunken stumbling that is my entry into fighting games (and spewing vitriol on Destructoid, which I have neglected this past week and a half).


This brings me to the last part of this blog. I have yet to pick a character for this new fighter. I really enjoy the character designs in this game and I am having trouble picking one that I like. So I figured I'd let you guys decide. These are the characters I'm considering: