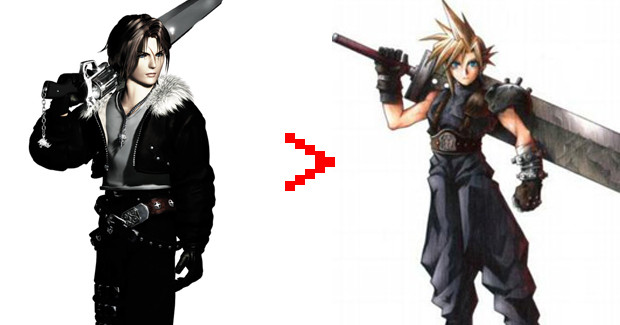 Growing up, I was both jealous and competitive. Especially when it came to my cousin.

If I didn't have something, I hated it. For example, I loved POGs because I had a decent collection at my disposal. But I hated Frisbees because my cousin had an awesome one that had that thing in the middle that let you spin it on your finger. Likewise, Hot Wheels were the best things ever, while Teenage Mutant Ninja Turtle cereal bowls were worthless pieces of plastic, at least as far as I was concerned.

So in 1999, when he owned Final Fantasy VII and I had Final Fantasy VIII, it was apparent which entry would quickly become a legitimately beautiful and perfectly executed game, and which one would be an overrated piece of crap enjoyed only by mindless fanboys.

Don't get me wrong, this opinion wasn't founded strictly on bias. FFVIII is still my favorite in the series to this day, mostly because its the one I relate to the most. But my hatred towards Cloud's adventure, however, was made up entirely of jealousy.

I had the opportunity to play FF7 when I borrowed it from him the same year, but I struggled to get into it. In the back of my mind, I knew this was his game, not mine. It is the game he owns, the game he plays, and the game he loves. As far as I was concerned, I had no business playing it.

FF8 on the other hand, that was all mine. That was my journey. I was the one who excitedly told friends of Squall's latest adventure. It was I who experienced the twists and turns of Garden, SeeDs, the sorceress, and everything else the story had to offer. Final Fantasy VIII was my game.

I wish I could say this was just because I was a pre-teen when these games came out, but I wholeheartedly held onto this bias into my twenties. It was only last year, plagued by the lack of traditional RPGs on the market, that I decided to go back and play whichever classics I could get my hands on.

Conveniently enough, it was around this time that Final Fantasy VII was released on PSN. Although I don't own any Sony consoles, my cousin (the mindless seven fanboy) had bought and downloaded it to his PSP. He hounded me to buckle down and play his favoritest RPG ever, and after 12 years, I finally gave Cloud a chance.

In hindsight, I wish I had been more open minded when I was younger. Someone who plays a game a dozen years after its release simply cannot appreciate it in the same way they would have been able to if they experienced it on day one.

To me, the graphics were complete garbage. In 1997, it was "OMG 3D RPG!". Likewise, it's pretty hard to not know the fate of Aeris by 2009, which definitely took away any shock value it had upon release. Needless to say, my experience with the game was much different than my cousin's.

But despite all these hurdles, I can't help but appreciate everything VII does offer. Between the compelling story, the well rounded battle system, and the overall experience, FF7 has earned a belated place in my heart.

Although Final Fantasy VIII will always be my personal favorite, I know it wouldn't have even been possible without VII paving the way. And in retrospect, it did a damn good job.

I still hate Frisbees though. Stupid things.
#Community    #OpinionEditorial
Login to vote this up!