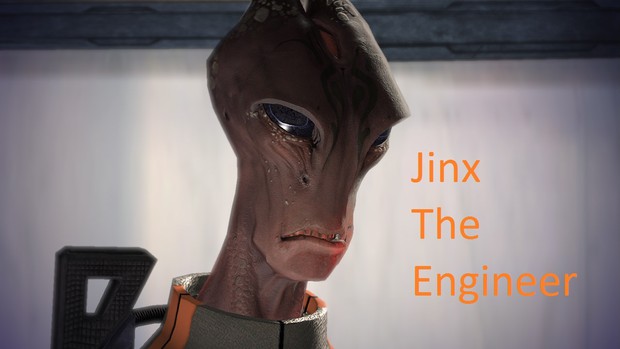 Jinx is one of the best engineers I know. He can fix any machine and build any defense drone to help aid us in battle. He works with what ever he has at his disposal and makes the best of it. That's a true engineer. He's a very resourceful type of engineer. You don't see too many of those type of engineers around. I guess when you come from a poor upbringing, you have to learn to rely on what you have.

He's a hero back on his home planet. He helped stave off numerous attacks from a rivaling colony by using of old military weapons and modifying them into turrets in which he built around his camp. He also repaired old security drones to keep watch over his camp while he's out helping me. He worries about the people of his camp day in and day out. I want to get him back home as soon as possible, but we all, even himself, know that he's needed on this ship.

I walked by Jinx's room and noticed that he wasn't in there. I figured he was in the Lab cooking up some new inventions, so I made my way over there.

I was greeted with, "Ah, Commander Savage. How are you doing today?" from Jinx when I entered the lab. "I'm good Jinx. What's that you're working on?" I replied. With his usual jittery movements, Jinx stopped his work to tell me, "This here is a mini robot that can shoot darts that will stun enemies just long enough to get the drop on them. I've been testing him out on my little test subjects and so far he's been a success, but he still needs a lot of work. Would you like me to demonstrate what he can do so far? It will leave you in awe." As much as I would have wanted to see Jinx's new project, I knew that I couldn't waste anymore time. We had to prepare ourselves. I couldn't flat out just tell him no because he might take offense. So I responded with, "I'll have to check it out later Jinx. Right now we have a mission that needs to be carried out." "Absolutely Commander. Missions take top priority. So what exactly is this mission Commander?" asked Jinx. "I received a transmission from a colony on Hades Gamma saying that they were under attack by the Geth and needed back up. We're going in to help them." I replied. "Hades Gamma? Last I heard, the last remaining colony there was wiped out years ago." Said Jinx suspiciously. He continued, "Are you sure you received a transmission from there? Because it's not very likely to ever receive transmissions from colonies in Hades Gamma anymore." I told him that I was positive and that we still needed to go check out what was going on. "Alright Commander. We just need to take caution while we're down there. You never know what could happen." said Jinx. Part of me wanted to snap at Jinx for second judging me on what I heard in the transmission and for telling me how I should proceed with the mission. I know what I heard, and I know how to take care of my team. But, Jinx had every right to be concerned. This was all very suspicious. I told him, "I appreciate your concern Jinx, I'll make sure we proceed to Hades Gamma with caution. Now go prepare yourself for battle, we'll be landing soon."

"Commander we are now approaching Hades Gamma. I hope you're just about ready sir." said Ace over the intercom. I told him that we were going to be ready by the time we arrived and to make sure to approach the colony with caution. Right before Ace ended the intercom, he let out an "Aye aye Commander."

I made my way back to my quarters to go suit up. As I was preparing myself, all I could think of was what if this mission goes bad. From what Jinx was telling me, it sounded like it could be a trap. But I know what I heard. It was a distressed voice in need of my help. I had to go figure out what was going on. If there was truly a colony down there, I just couldn't leave it to be wiped out. But if it was a trap, I also couldn't leave who ever was there to wait and spring a trap on another unsuspecting ship. The only way I could figure out anything was by going down there to see for myself.

As long as I took the time to make the right decisions, everything would be okay. Nothing should go wrong. Right?
#Community    #OpinionEditorial
Login to vote this up!