A heartfelt farewell from your DtoidLosAngeles curator 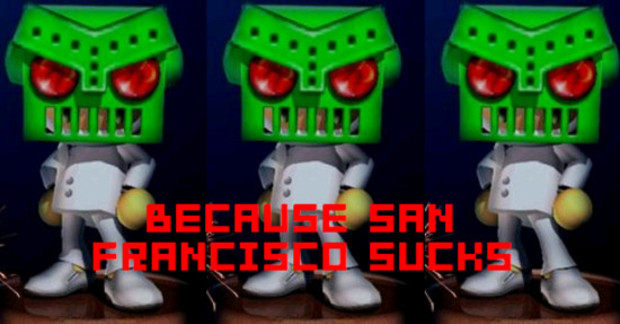 Hello, citizens of El Pueblo de Nuestra Seńora de los Ángeles del Río de Porciúncula. I'm pulling out all of the stops on the name of our, er, your city, because this will be my last post as the person running DtoidLosAngeles. The illustrious Jonathan Ross will be taking over as the sole proprietor of this blog.

Most of you already know, but I have now moved out of the city. Out of the state, even. So it no longer makes sense for me to run the show around here. I'll still be part of your Google Group, so I won't be gone from your discussions, but I certainly won't be making many appearances as your parties.

Looking back, I surprised myself that I've actually been doing this for almost two and a half years now. Indeed, DtoidLosAngeles has been around since before the whole city group thing really took off. In fact, meeting up with Destructoid people in real life is something I had wanted to do for awhile.

Starting up DtoidLosAngeles was really a selfish move on my part. I moved to the Los Angeles area late in 2007, and I had hardly any friends nearby. Most of my peers weren't interested in videogames, so I spent most of my time alone, until I figured that there must be some other Destructoid people in Los Angeles who I could meet. So that is what I set out to do. Now I'm gone, and I just want to thank everybody who has been my friend over the past few years. In roughly chronological order...

Chad, Tristero, Charlie: As some of the first people I met here, you couldn't have been more welcoming. Thanks for the NES birthday gift. Bee Suit Boyz forever!
Chad: I will always remember the time I stayed at your place past when the trains stop running, so I had to stay the night. Then when I woke up the next morning, you were playing Super Mario Galaxy, just making him jump and orbit things and having a blast with it. Classic Chad moment right there.
Tristero: I'm sorry I didn't get to see you again before we left. The going away party ended up not happening. I will have to make it up to you some time in the near future (PAX maybe?), but until then, if I ever catch you on Xbox Live, I'll be sure to get in a game of Left 4 Dead with you.
Ark: Your generosity is unparalleled. You gifted me games, you gave me a retro console, you drove me up to San Francisco, you took me to the Kung Fu Panda launch event, you brought me to the Dreamworks family lunch, you bought expensive alcohol for my parties, and through all of that, what did I do for you? I feel like I did hardly anything. I will miss you and Emily dearly, and I regret that I never got to meet Professor Rodger.
J-Ro: We didn't always see eye-to-eye on games (I hate fighters, you hate Rock Band) but I felt immediately comfortable with you, and I'm sure I'll be keeping in touch with you on IRC. I'd invite you to come visit us, but I know you hate Phoenix.
Dave & Kerry: It still breaks my heart that two intelligent, educated, witty (if not sometimes groan-inducingly cheesy) people are not going to help keep the human race afloat by producing offspring. Do it for America!
Kyle: If somebody had told me as I was graduating college that my best friend in Los Angeles would be a thirty-year-old ex-Mormon father-of-two, I probably wouldn't have believed it. Here we are now, having shared so much. Left 4 Dead, Gears of War, Lost Odyssey, Rock Band, 'Splosion Man, Borderlands... I know for a fact that if it weren't for our shared propensity for rhythm games and Achievement whoring, I would have never gotten through the Endless Setlist in Rock Band.
Kyle & Donna: Parties at your place were always fantastic. Sure, the place could have used air conditioning, but where else could we go for giant inflatable sliding, loud-as-we-wanted Rock Banding, and street parking that doesn't require fifteen minutes of circling the block?
Travis: I will miss you tons, man. Nobody could make me laugh quite as well as you do. Thanks for all of the backyard barbecues and basement drumming, too. If I ever get my game made, I am totally going to hit you up for some sweet baritone voice work.
Mike & Steve: You guys are always a blast to hang out with. Photo booth up front, fire pit in the back, and food more delicious than most others on this list. I will certainly miss you guys, but Lib will miss you even more; she connected with you two more strongly than anybody else.
Ron: Your playful attitude is something I'll definitely miss. Plus, now I need a new black friend! You gave us all a scare recently (seriously, I had a dream that you died and I was totally sad and crying in my dream), and I'm so glad that your HP didn't drop to zero. You have to stick around this world for me to compare our Gamerscores at least as long as I do.
Tyler: Where the heck have you been? I feel like I haven't seen you since the Puzzle Quest: Galactrix launch event. We had some good times there, at the Gears of War 2 event, and at some random NARPs. I've been telling you this for months now, but you need to make yourself more available to us. Well, not us, them, I guess.
Alex: I regret that we met you so late in our tenure in Los Angeles. You're a wacky character, and I don't think I'll ever has as much fun playing Rock Band as when you're on the mic. Guesting on LAPD was a pleasure and an honor, and your extreme generosity at Rivera is something I'll remember forever.
Lib: We didn't meet in Los Angeles, but you followed me there. We shared our first apartment in Pasadena, and in it, you were magically transformed from my girlfriend to my fiancée. I'll miss walking around Little Tokyo with you, going to Griffith Observatory (although you Wolfgang Pucked up your dinner), driving down to Disneyland and Medieval Times, driving up to Magic Mountain and to see my grandparents, and everything else we shared while we were there. Luckily, I don't have to miss you, because you're the one person I got to take with me. I love you.
Everybody else: Seriously, this list is way long. I've met a lot of you in the time that I've been running DtoidLosAngeles, and I appreciate all of the smiles, hugs, gaming, and love you guys have to offer. If I'm ever in town again, I will be sure to let you all know.

And lastly, to any Arizona residents (particularly Phoenix), keep on the lookout for your own city group. It's on the way!
#Community    #NOTvideogamesrelated
Login to vote this up!