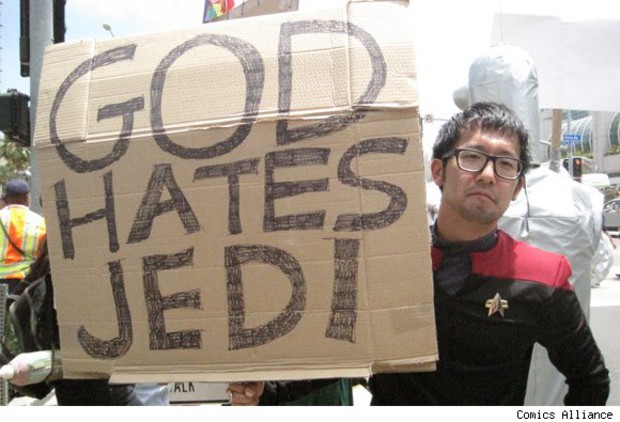 On the whole, nerds tend to get a bad rap when it comes to the way they are socially perceived. At best, we can be perceived as awkward, unfashionable, and socially inept. At worst, and unfortunately more commonly, we are seen as people who scream obscenities on voice chat and Internet message boards while hiding behind the veil of anonymity. The middle-school jackass calling everyone �fags� on Xbox Live is sadly becoming synonymous with �video game nerd� in popular culture. Thankfully, that is not the case in reality, as demonstrated by some fine folks at this year�s Comic-Con who organized a counter protest against the King Of All Jackasses, Fred Phelps and his Westboro Baptist Church.

In case you don�t know, Fred Phelps and his church spend all of their time running around the country staging protests that claim �God hates America� because we tolerate gay people. After all, according to Mr. Phelps, �God hates fags�. If that weren�t enough to convince you Mr. Phelps and his ilk are absolutely horrible human beings, they even conduct these protests at military funerals, claiming that �God loves IEDs�. (IEDs, or Improvised Explosive Devices, are one of the most lethal obstacles that soldiers face in Iraq and Afghanistan.)

It appears, for reasons I and most people don�t entirely understand, that Mr. Phelps and his church thought Comic-Con would be an appropriate place to stage their protest. Maybe God hates nerds too? Whatever the reason, members of the Westboro Baptist Church came to Comic-Con one morning to spread their message of hate and intolerance. They came to the convention center with their horrible little signs... and were met by one of the most wonderfully nerdy counter-protests ever seen. Comic Alliance has the story here, as well as a number of awesome photos and a great short video documenting the event.

As both a nerd and one of the �fags� that Mr. Phelps so desperately despises, I was extremely pleased to read this story this morning. Just in terms of humor the event is a nerdy treasure trove, with images including satirical protest signs from Bender (�Kill All Humans�) and Starfleet officers (�God Hates Jedi�). However, beyond the funny, this event has made me proud to be a nerd. These are the people that I love to be able to point to and say �See? Nerds are awesome and they�re not just stuck in their rooms playing games or painting action figures. They use their powers, knowledge, and wittiness for good too!�

I�ve been in a protest before, and it takes a surprising amount of balls and energy to do it. It�s not easy, even with a group of people, to walk out into public and start making a scene. On top of that, this fine group of supermen, superwomen, and robots, took time out of their fun convention schedule to do this. They could have just as easily ignored what was going on and attend a much more fun panel. Instead, they decided to take a stand against the hatefulness of Fred Phelps and his church, and in doing so demonstrated just how awesome nerds can be.

Nerdy counter protestors, from the bottom of my heart, thank you. This is why I love nerds, and it is why I love communities like the Destructoid community. It�s people like them and people like you who make being a nerd such an awesome experience.
#Community    #Rants
Login to vote this up!