Red Dead Redemption has to be one of the most badass games I have ever played. It wowed me with it's "oh my god" moments time and time again. From when I got my newly beautifull horse stolen, to when I got mauled by a cougar, and to when I got a buffalo rifle and was confused as to why racoons would dissapear after I shoot them. It is a buffalo rifle, what the fuck was I expecting?

I have to say, I really enjoyed this games story, it really felt meaningfull. It wasn't slapped on just to give you a reason to shoot something. It felt right, and it felt good. Grand Theft Auto in the Old West, except, it was way better then any GTA game I've played. I've always wanted to play a game set in the Old West, and this game executes the setting perfectly.

This game may be for a mature audience, but I think it is more then just being at the right age to play. It ain't one of those games where you should keep the kiddies away from solely because of it's violence. Its a game to keep away from the kiddies, cause it is highly unlikely they would take enjoyment or understanding from the story itself. Marston, the main character, deals with some pretty heavy shit afterall. You spend most of the game being tugged around by assholes who want your help, but don't like returning favors. You can't blame Marston for being a very jaded man, for the shit he says is the pathetic truth that is still the reality of today. With guns and money, there will be no freedom. The most sad, but true thing any man will ever say.

Moving on to the gameplay itself, the part of the game that will make you smile. You may have no choice on what to say during charater interactions through cutscenes, you can still choose to be what you want otherwise. You can be an outlaw, or a lawman through your actions. You can rob people, even rob banks apparently, but the outlaw side of the spectrum was one I did not tread on. I tried, but for some odd reason, unlike in Mass Effect and Fallout 3, I just didn't feel good being bad. I gave the ladies rides to town, I helped the guys get their carts back, and I didn't kill no man if I didn't have to. I was the lasso type of man, a real good guy. I enjoyed it, but I wonder what the other side is like? I guess I will find out when I decide to give the game an other trip through.

As you help or hurt people, you gain a reputation based off that. And you gain fame aswell, no mater your choices. The more you do, the more people will reconize you, and ask for help. If you are a good guy, people will even give you gifts. Or if it is a lady of the church, you'll be asked for donations, and so forth. I did find it pretty cool when everyone on the street would start saying "Hey, its that Marston, how ya doin!", or other things of the sort. Being good, felt rather good.

Red Dead gives you a large amount of things to do, non story related. There are mini games to be played for money, like poker, blackjack, some five finger fillet, and a few others. My personal favorite being Liars Dice, I rock at the game, boy is that shit a whole lotta fun! You can also partake in a few jobs, like nightwatch and horse breaking.

My favorite side missions are what are called Challenges. It is an assortment of little things to do that test you on just how good you are at this game. It involves doing something in particular with your gun, killing a certain amount of animals and skinning them, and even picking flowers, isn't Marston just such a lovely sweethear? The one I found coolest of all though, was the treasure hunter challenges. You get a map, and by using the power of your brain, you must locate the treasure. That was alot of fun, and it was kinda sad once I found them all. I wanted it to go forever.

Like in many games, you can outfit Marston with different styles, but you have to earn it. In total, there is 15 outfits, which you acquire by completing certain tasks in game. I really enjoyed this too, although I never ending up changing his clothes, I just really liked his normal outfit. However, you can't ignore the awesomeness that is dress up the ugly bounty hunter.

In all this greatness, there is still faults, and it mostly came with the horsey controls for me. It was frustrating at first, and it made me angry. But, eventually I came across that "hallelujah" moment and got it down. I over all did well with the controls for Marston himself, but the cover system felt a little clumsy. I would try to break away from a rock, but would just end up running a circle around it and getting shoot to death... Yeah, burn. The game's duel system is what really got me(Yes, duel system, old western style exactly how you picture it, very awesome). The explaination on how the controls work went by a little to fast. I only caught half of it, and it ended up making no sense. I obviously understood it enough though, cause I never lost. However, after each duel, I would stare at the TV with amazement, thinking, how the fuck did I do that?

The game is overall a masterpiece when it comes to looks. Standing on the egde of a cliff, overlooking a lake, and seeing the far off horizon, is remarkable. I would stand on cliffs looking onward for minutes at a time, just enjoying the incredible look of this game. It really captures the look of the West, far better then I could ever imagine. But the feel, was also captured amazingly. Charaters at times are somewhat cliched, but within reason based off the setting. Voice acting is great, but that was no suprise from Rockstar. That goes along with the charater animations, which looked very natural, especially the running in cowboy boots. There is not a doubt in my mind it would look that ridiculous, and that is no joke.

Something that really caught my attention was the animals in this game. There is a large vareity of different varmin, and there existence can be more threatening to you then any man. Nothing says "Old West" like being jumped by two cougars.... or three bears.... or seven wolves. The animal population is high, as it would be, and offers hysterical results. Don't shoot one bear expecting you're out of the ball park. They'll come at you, at come at you, and come at you, and then you'll be out of bullets. And don't be suprised to be ravaged by a wild boar while you are trying to protect yourself from those growling grizzlies.

A few last notes on this game before I wrap it up. I did have some technical issues with the game. More then once it chugged so badly, I had to turn of my 360. I know there is a lot loaded at once in this game, but it is still unexceptable. If you so choose to go for 100% in this game, it will take you some time. It is a long lived game, with a lot going on in the world. This is a must play for any gamer. It sets the bar for anyone looking to make a western game, and it sets it really high. I enjoyed this game to the fullest, and I can tell you, it won't be very long before I get the uncontrolable urge to play it again. 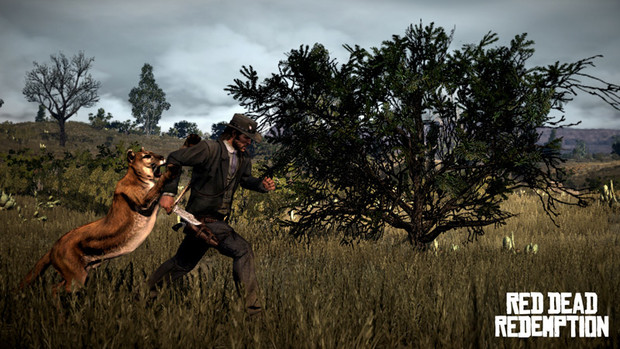 fuck you
#Community    #reviews
Login to vote this up!