6:28 PM on 07.12.2010 (server time)    0
[I was playing with the idea of sharing some music with you guys. As we all know AlphaDeus has returned and shared some of his music lately which I never commented on but loved the Friday The 13th and Deadly Premonition homages. Difference is with him, he has a setup that allows him to keep recording, whereas all my recording would have to be done live since all I have is a huge Marshall stack and my guitar but I do have demos from when I was recording solo on the computer program "Rifftracks" (not to be confused with MST3K alumni's hilarious new thingy) but the other difference from AlphaDeus' stuff is mine is all original stuff (for what it's worth). Sorry? Anyways, feedback, would anyone want to hear some stuff? Just a thought, I'm kinda like George McFly in that I'm never happy with what I've recorded, so I cobbled together a 10 minute collage of various demo'ed songs and proceeded to do nothing with it.]

I had the recent occasion to pick up a few CD's for a cool 20 bucks. I kinda like how newer stuff is roughly about 10 bucks, or atleast with the deals they are. Still sad but understandable to see more obscure bands always cost around 25 to 30 bucks a pop for their CD wares. However I'd decided to pick up the new Deftones album and noticed the 2 for 20 deal and picked up another...MYSTERY CD WHICH YOU'LL HAVE TO READ ABOUT IN A LITTLE BIT. 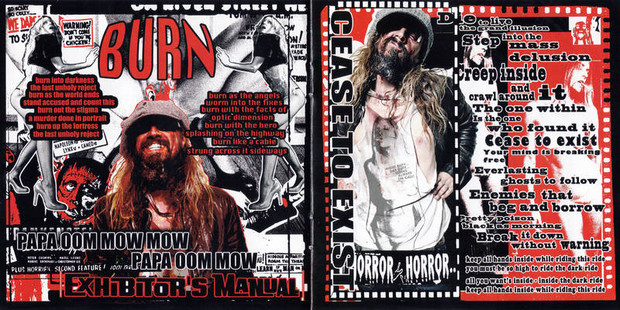