No Sundays with Sagat again this weekend: Here's a rant (or two) instead

We shot five episodes of the series right after Andy and I got back E3, but other than the one we posted with Birdie, they've all been sitting on Andy''s hard drive since then, untouched and unloved. I haven't been able to watch them even once, just to see if they suck or not. The longer I go without watching them, the more I suspect that they suck, especially the one about Dead Rising. I desperately want to watch them, just to see if they're any good, but I can't

That's mostly because Andy is working around the clock on putting the finishing touches on his NESN show, The Batter's Box. He's got to get everything done by tomorrow in order to get it to the station by Monday, but after that, he said he'd help me get a few Sundays with Sagat(s) finished off, hopefully to be posted on Tuesday or Wednesday.

In case you're curious, here's a promo I did for last season of the Batter's Box. It's not that good.

* TheCleaningGuy was nice enough to invite me onto Sega Addicts for a podcast last week. I'm too self conscious to listen to it. Does it suck?

* Is there anything more frustrating than being totally misunderstood, particularly by thousands of people? I'm not sure if there is.

I shot a video for E3 this year where I put my arm around a "booth babe" for 45 seconds instead, of the customary 20 seconds. I thought that I stated clearly in the post that the purpose of the video was to show that putting your arm around someone you don't know at all just because you like their looks is creepy, that taking pride in this by taking a picture of yourself in the act is creepier, and perhaps creepiest of all is that most "booth babes" don't seem to see any of that.

As some of you may know, I have a master's degree in social work. I've tried to help out many prostitutes, and most of the time, it's depressing as hell to get into their lives with them. Often times, the creepiest thing about connecting with them is that they seem totally resigned to their lives, and unconcerned with the fact that what their doing is desensitizing them to the meaning of sex and love. Sure, every once in a while, you'll meet a prostitute (usually a guy) who just loves sex and money, doesn't feel dis-empowered by being paid for sex, and can't get out of prostitution relatively unscathed. Most times though, prostitution means drugs, violence, loneliness, neglect, self loathing, emotional isolation, and self destruction. The creepy part is, it doesn't take long for them to get to the point where the don't even that anymore.

Booth babes are not prostitutes, but they are sex workers. They do expose themselves, visually and physically, to strangers who may treat them well, or may treat them like shit. Most seem to do it because think that's what they're good at, that that's what their good for, that that's where their "strengths" lie; being objectified, being treated like a giant, sexy action figure at best, a piece of meat at worst.

For the record, I think that people who dress up in mascot outfits and walk around at Disneyland get objectified too, just not sexually. Sometimes they get beat up by drunkards, but for the most part, they do alright. They're loved by kids, pitied by adults, but like booth babes, they are sometimes treated like giant action figures too. The difference is, they are (almost) never treated like sex toys.

So yeah, that's what I think of the booth babe phenomena, and that's why I made that video.

Sadly, a lot of people didn't get the point. That must be my fault. I am apparently not destined to be the next Sasha Baron Cohen. When I pretend to be a person I'm not (role playing?) to show how that person is ridiculous, it doesn't come across nearly as clearly. Maybe I should have done a funny accent or something, and put a "booth babe" in a burlap sack and try to carry her away the way Borat did to Pam Anderson? Would that have better?

I thought the creepy face I was making would be enough to make the point -- "Booth babe posing dudes are creepy", but I guess that wasn't enough, as more than a couple people across the internet are claiming that I sexually harassed the woman, that I'm a "piece of shit", and that the whole joke was at the expense of the "booth babe".

It's weird to me, because even if you think the video is humorless or is in poor taste, I think it's still pretty obvious what my intent was. It's that my intent isn't coming across that has me so frustrated. I can only guess it's because this topic is too evokative for some people, that they have an emotion -- "Hey! That guys got his arm around that booth babe for too long! CREEPY!" and then an reaction-- "I HATE THAT GUY!" without ever getting to the idea which was supposed to be -- "It's not that he has his arm around her for too long that creepy, it's that he's posing with her at all, that it took her so long to break the pose, that she does that kind of stuff all day and no one thinks anything of it. That's what's creepy!"

It's the same as what Edmund McMillen was saying on Bit Transmission, about when people get offended by the word "fuck" but not by "f*ck" or "fcuk". There emotion blinds them from reason. First, they get an emotional reaction from the word "fuck". The feel offended, then they get angry at the "perpetrator" of the word, though they don't even know why they're feeling what they're feeling. It's just because they "read a bad word". That's enough to inspire anger and indignation, and a hostile reaction like "You shouldn't let words like that on your website!" or "I'm not going to play your game because it has swears in it".

Spelling to word wrong, or leaving out a letter, doesn't change the meaning at all, but for some reason, it doesn't inspire the same emotions. If people bothered to think for a second, they'd see that they should be offended by "fuck" or "fcuk", as long as the word wasn't used in a way that had an offensive meaning.

This also happens with the grammar police. People think that just because you fucked up and spelled a word wrong, that it's a good idea to disregard everything you wrote. They emotionally link "bad speller" with "bad writer", and "bad spelling" to "bad ideas", without giving any thought to is that reaction makes any sense.

The moral of the story is, I'm frustrated.

* Speaking of Edmund McMillen, he sent me a t-shirt and couple of comics. Awesome.

I probably wont be able to review Super Meat Boy now, as people will claim that Edmund bought me off if I give it a good score. Truth is, the only reason this stuff means anything to me is that I already love Meat Boy (and Super Meat Boy). Like with the Bit Trip games, I loved Edmund's games first, then through my love of the games, I got to actually meet the guy, and lucky for me, we got a long.

Anyway, I thought this stuff was awesome and I wanted to show it to you. Here it is -- 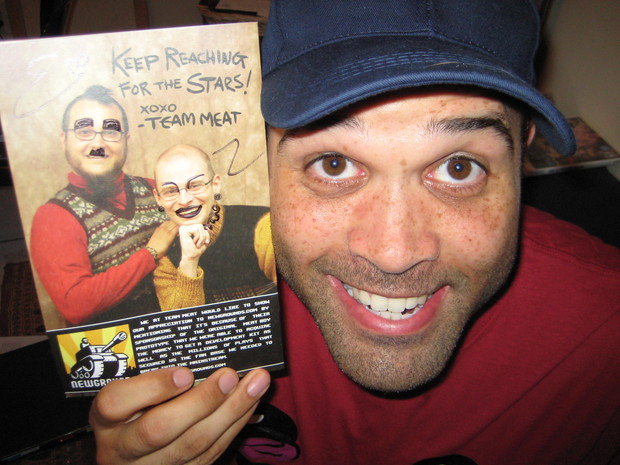 Also, I'm a total jackass for not mentioning the birth of flash games in that "revolutions" post from last week.

* Beavis an Butthead might make a comeback? Good idea? Bad idea? Personally, I'm hoping that it signals the return of "indie" TV to Mtv.

Mtv is known for making cheap shows. As far as original programming, that's always what they've been about. Sadly, "cheap shows" went from meaning sock puppet action comedies to reality TV. For a while, the channel had a decent balance, with 50% videos, 35% cartoons and other low budget oddities, and 15% reality shows. Now it's turned to 15% videos, 85% reality shows, and no oddities.

I might sound naive here, but I think that could change back. Adult Swim and the cartoons of Comedy Central have been getting more and more popular. That's the kind of programming that Mtv used to excel at. That's a huge audience that they abandoned, but with a little effort, they could get us back.

But will they even try? Gads, I hope so.

Anyway, enough out of me. If you managed to read all that, thank you, and if not, I understand.

[Edit: And if you ever think I'm being a dick, feel free to drop me a PM.]
#Community    #Rants
Login to vote this up!