11:46 AM on 07.06.2010 (server time)    0
Imagine if racing was directed by Michael Bay, and you've a rough approximation of what Split/Second: Velocity looks like. Shiny sports cars and humvee-sized jeep things drifting and colliding through environments laboriously constructed and rigged to explode, and I don't just mean red barrels with convenient flame decals on them (there's a game mode where those fall off the back of trucks). Since yesterday, I've blown up a power plant cooling chimney, brought down an air control tower, dropped a bridge (and a freeway overpass) on various unfortunate opponents, derailed a freight train, dodged fighter jets on the listing deck of an aircraft carrier, and been flattened by the disintegrating engine of a flaming passenger aircraft making an emergency landing.

I mean, sure, you respawn, but still.

Developed by Black Rock Studios, the unnecessarily punctuated Split/Second: Velocity is this new racing game you've probably heard of. And it's great. The single-player (I'm about half way through) occasionally induces great frustration and will certainly continue to do so in future, and the console-designed UI and menus are almost as annoying, but the actual racing and its various game modes are packed with both adrenalin and neat new ideas. I wouldn't go so far as to say that it's flawless - the nuanced drifting/cornering system could be a little more intuitive and perhaps consistent between vehicles, and the game's habit of splashing pyrotechnics and smoke everywhere occasionally leads to you dying to something you just didn't see - but I would certainly call it brilliant, or good old 'awesome'. 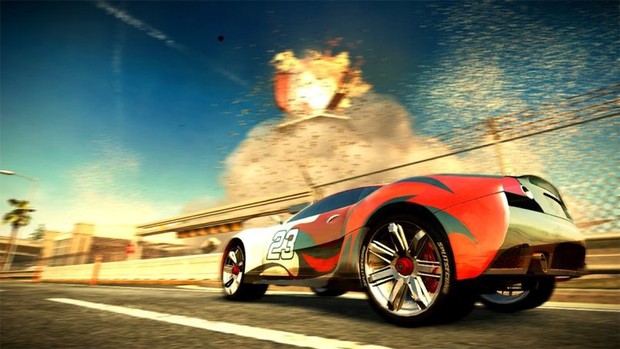 Right behind this car is a missile-firing helicopter, four wrecks, and a train bridge blowing up. Honestly.


Elimination is vicious. It's a race, but after a minute, the car in last place is permanently taken out, and the same again every 20 seconds until there's only one left. It's a lot harder than a race, because you can't cruise in last place and wait for a good opportunity to play catch-up; you need to stay near or at the front of the pack the whole time. One untimely power play or collision can take you out of the race. It's much harder, and consequently much more adrenalin-filled, but also a whole lot more frustrating in the story mode.

Detonator has you trying to beat set times on a track lap while power plays go off ahead of you. It's mostly a way to show off the best a track has to offer. It's also very difficult to beat the 'first place' record - I haven't managed to do so yet, although I think I've achieved second place on all of the ones I've done so far. It's kind of relaxing compared to the other modes; it's also cinematic, as the power plays that detonate tend to be the big, cataclysmic ones and the level-unique ones, rather than the ubiquitous bomb-dropping helicopters and such like. It'd be a great way to practice levels if it didn't judge your performance when you finished the lap.

To sum up: Split/Second makes a lot of innovations, and most of them work extremely well. It feels polished and tight, and its replay value is very high (as the race is never really the same twice). It goes straight for the adrenalin centre of your brain, and never lets up. It does have a few, generally minor, flaws, and the UI makes me want to punch it sometimes, but it's damn fun. Also, an entire dam.
#Community    #reviews
Login to vote this up!