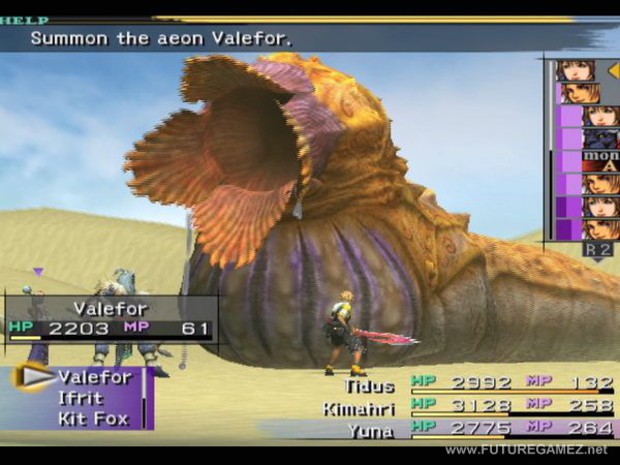 Fantastic enemy design has always been a part of the ff series, FFX is no different

Conclusion
FFX is one of the best ff games. It's not as amazing as 9, not as new and fresh as 12, but it finds a comfortable middle ground, and plays things safe, and properly. You won't be shocked by anything in the game, and at the same time, you'll never get bored. Your never seeing the same thing for too long, and there's plenty of mix-up to keep up the pace, albeit sometimes poorly executed mix-up. FFX is one of those ps2 games that is worth loading in your backwards compatible ps3, or finding at EB for 10 bucks.

The 100 hour mark is going to hardly be a goal, the 300 or even 400 hour mark well be the true testament to the game, which resides on one thing, the monster arena. The monster arena, is derived from 3 things really, 1 exploring to find new monsters, 2 capturing them to create new monsters in the arena, and 3, fighting them. It is a great way to suck up hours after you've unlocked everyone's ultimate weapon, and stat boosts for them.

There is really so much to the 'after-game' in ff10, that 100 hours in, you'll still have plenty of things to .

If it's the summer drought for you, as it is me, going back to play some of these old games can be a blast. Nostalgia is a beatiful thing. If it's new territory, still, give it a whirl. It's a rpg classic, and what faults it has, are minimal compared to the overall experience. You may not end up sinking 100 hours into it, but it's worth the one play through.

Result: MUST PLAY
#Community    #PS3
Login to vote this up!