10:50 AM on 07.02.2010 (server time)    0
That's right, brackets within brackets. Stylish. Tonight I'm having a gathering of friends. Just a few close ones and well the XBox 360 shall be doing some travelling to a Plasma T.V. which in itself shall make tonight even more Awesome-O.

So I was thinking since the coolest thing I could think of to par-T-down was to play some video games I'd like to invite any and all on my friends list here and on the 360 itself to join me in some good ol' Multiplayer acti-on-e. However being the fact that I'm so fucking in love with the Left 4 Dead games I'd make them the centerpiece of said gaming tonight. So again if you're around, want to play some games do hit me up for the following. Also I should have some of my local buddies joining me as well so WHOOO HOOO GAMES AND SUCH.

These aren't set in stone and totally depend on who shows up. Everyone's welcome to join. 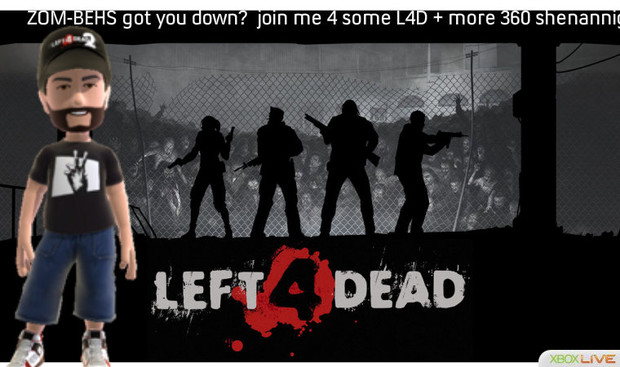 you get the basic jist

Hell to be honest, we could just play Left 4 Dead 1 & 2 all night and I'd be happy, but I'm sayin' variety and stuff. Hell I may just start hosting L4D FNF's if the guys running the 360 FNF's are cool with that. Sorry about the short notice, just thought I'd throw this out there for anyone whose interested.
#Community    #Xbox360
Login to vote this up!