6:33 PM on 06.30.2010 (server time)    0
So recently I managed to get ahold of Singularity. I borrowed it from a friend, liked it, so I went out and bought it. Seeing the Unreal Engine Symbol always makes me feel really happy, in a very geeky way.

Oh, and as a bit of a prelude, I�ve been using this website called YouGamers.com, where it analyzes your computer and tells you if you can run a game or not. This website, however, is only useful if you don�t know how to completely Optimize your PC (Turn off unnecessary devices, Defrag, CCleaner, Gamebooster, msconfig, ReadyBoost, etc.). Look at what it told me. 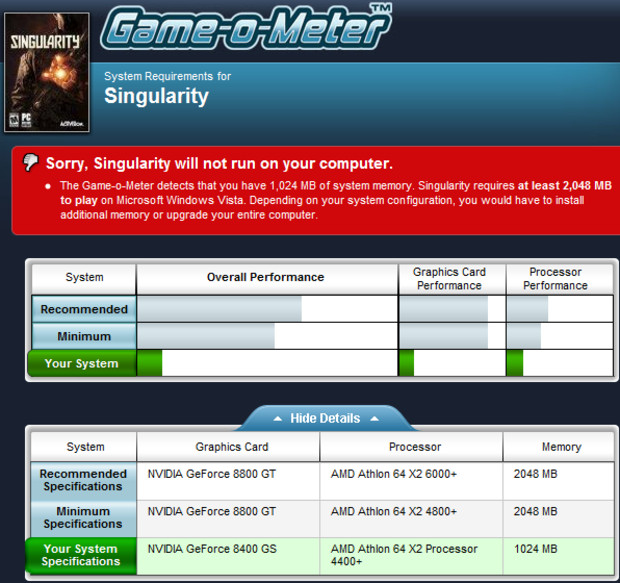 I ran the game flawlessly on minimum settings.

Anyways, back to the review.


Story:
The story is that during world war II, the soviets discovered a volatile substance called E-99. They decide to discover what it has inside, So Stalin decides to allow limitless research funds for an island near Soviet Union called Katorga-12. Then disaster strikes, and they bury the evidence of the place. In present time, 2010, a radiation surge was detected coming from Katorga-12. A squad is sent to investigate with their helicopter. The helicopter is then hit with an EMP. You are now on Katorga-12, waiting for a rescue and trying to turn back time and reverse the Katorga-12 mission.

Graphics:
Even on minimum settings, this thing is a BEAST.

Music/Sounds:
They capture the mood perfectly, IMO. When you�re in danger, the music becomes fast paced, and when they want to scare you, they set up flash backs with frightening sounds/screams

Scare Factor:
Since this game was sorta aiming for the scary/creepy feeling, I�d say it did pretty well for the most part. Made me jump twice in roughly 5 hours of gameplay (Not-consecutive). Made me feel creepy through 99.9999% of the game.

Gameplay:
The gameplay is really addictive. You get new gadgets along the way, including a repulsion beam, AKA Iron Man�s weapon. Which was what I thought at first. You don�t get his suit, you just get a repulsor like his. But the first hour-or-so of gameplay was just�ugh..Because all you really do within that hour is walk, talk, crouch, and jump. Which I cannot stand in video games. First impressions people. They happen within the first hour, and if I don�t get a gun till then, then yeah..But I let that slide.

There�s a feature where you can send out a little �Bing� noise and footsteps appear on the ground telling you where to go. I�m gonna send a thank-you letter to the makers of this game for just that reason. Cause I always get lost in games. I still haven�t beat metroid prime corruption.

You can also get the TMD which allows you to age objects/people forward or backward in time. That�s pretty neat and all, but it�s VERY LIMITED. You can only age enemies, boxes, and story elements. Now if I could age ANYTHING, that would be very entertaining.

Then there�s the��.blue-ball-thing-that-creates-a-chrono-sphere-in-time-that-slow-shit-down. Again, very limited. Limited to fans only. Literal fans, not like appreciators of stuff.

There are also a few neat guns, such as the Seeker. The Seeker allows you to shoot a bullet and then control it in-air. It�s really nifty, but unless your mouse sensitivity is set to max, it�s hard to make a turn. Also, it�s hard to have much fun with it when every time you pick up ammo for it, it�s either 1 or 2 bullets.

You can also upgrade your weapons or yourself. But it�s very standard. More firepower, more ammo, etc.

Overall, the gameplay is pretty friggin amazing, but the limited-ness of the TMD and Seeker do bother me a little bit.

Buy it. The gameplay is amazing, the graphics are superb, the music is creepy, the atmosphere is creepy, the innovation is good, and everything coming together is just amazing.


Also yes, I know my graphic card is dirt.
#Community    #reviews
Login to vote this up!