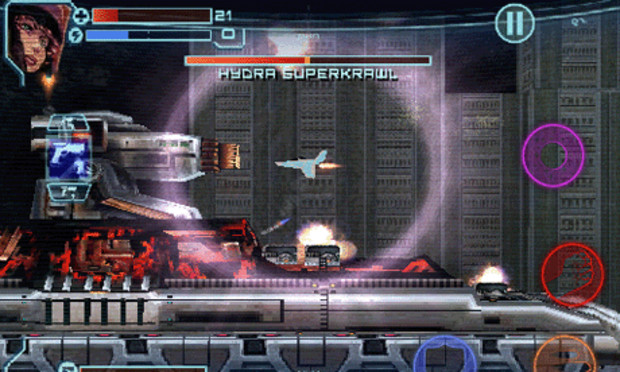 Controlling your character falls under the 'pro' side as well, but just barely. The touch analog stick works well; moving your character around bullets is a breeze, although Makita does move a little too fast sometimes for my sake. Pulling off melee combos and long-range shots work too, but the lock-on system hinders things when you're in desperate need for those strafing attacks. When you get the lock, strafing is easy. But note that after locking on to an opponent or turret, it will disappear after a while. Many a boss fight was lost because of this and the fact that the game forces you to start over from the beginning makes this a bit more frustrating. And if there is an auto lock-on, I haven't seen it.

Despite the control issues, I would still recommend this game if it not for one major flaw. When it comes to overall stability, there is none. From the first level, the game would shudder and freeze for a few moments before slowly coming back down. It did this repeatedly, and ended up stopping some of my combos in mid-attack while stopping the attacks of some enemies as well. Hell, even the music would start to skip. This was before I downloaded the new OS, and even after it's still doing it (to the same extent). Oddly, this instability gets worse when the game goes into a birds-eye perspective that's not a boss fight. However, what I found interesting was that when comparing this to some of my other graphics-heavy games, if there was ever a stability glitch said games would shut themselves off, sending me back to the home page. The Red Star would fight through its glitches and would refuse to crash. Valiant, but by that time I was done and up on Fruit Ninja.

I'll say this in closing: if you have absolutely no other means to find a copy of The Red Star on either PSP or PS2, then for the love of Christ, please find them. For a game like this where you're dodging bullet-hell style bosses and varying enemy types, not having to worry about when it'll short out on you is key. But the lack of stability in every level is making me pray for a patch sooner or later. In short, when it works it works, but most of the time it doesn't and I don't feel as if it's justifying the $5.00 price tag. This is the first time I've been able to play through TRS in full, and it will be for other gamers as well. It's disappointing that it turned out this way, but this is a port job after all.


So by all means, DEMO IT unless you're desperate. Or have 5 bones to spare.
#Community
Login to vote this up!