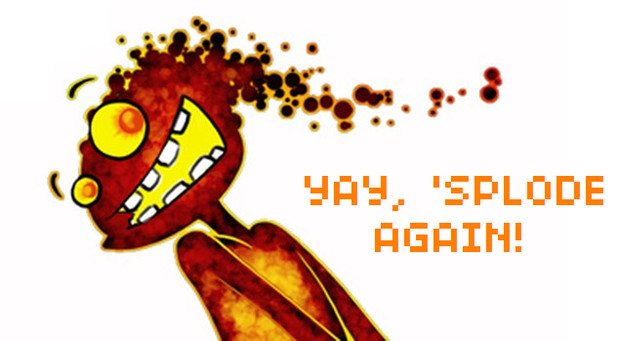 In case you don't know, 'Splosion Man is an XBLA platform game that was released last year. Even if you don't have firsthand experience with it, you ought to know a bit about it, as it got a nine out of ten in the official Destructoid review.

And indeed, much else has been said about the game's style and charm, including Ashley Davis's piece on 'Splosion Man's idle animations.

However, Team Meat's Edmund McMillen's recent blog posts on fundamental game design principles has gotten me thinking less about the style 'Splosion Man exudes, and more about all of the other design choices that Twisted Pixel put into the game. Specifically, how everything comes together to make 'Splosion Man a nearly perfect game.

The first thing anybody notices about 'Splosion Man's design is the simplicity of the controls. The titular character moves with the left stick and has but one action, assigned to all four face buttons; pressing any of them makes him 'splode. The beauty of 'Splosion Man as a character is that 'sploding may be all he can do, but it serves several purposes. 'Sploding lets the player jump, attack, defend, and interact with the environment. As far as controls are concerned, 'Splosion Man is a game whose mechanics could have been on the NES, and held its own against the myriad of 2D platformers of the time.

The single player campaign is fast-paced endeavor, but it adheres closely to McMillen's ideas on his upcoming 2D platformer. The risk/reward is present in 'Splosion Man's cakes, which are typically either out of the way or in plain sight but visibly difficult to reach. The reward is largely intrinsic, though the cakes do contribute to Achievements and higher Leaderboard scores, if those hold any extrinsic value for the player. And much like Super Meat Boy, the behaviors that 'Splosion Man rewards are exploration and raw platforming skill.

One of the elements of 'Splosion Man that really shines is its difficulty curve. The above video shows one of the more exhilirating later levels, and it demonstrates something that appears impossible to a 'sploding novice. But with frequent checkpoints and unlimited lives, the player can work his way up to completing each of the games 50 levels. When he does get to the end, conquers the final boss, and watches the ridiculous closing credits, 'Splosion Man informs the player about Hardcore Mode, which removes checkpoints and adds one-hit kills. And after struggling through the last few levels, even an experienced 'sploder will deem the task impossible.

Ingeniously, the Achievements actually provide a road map for how to play through and completely finish 'Splosion Man. Beat the single player campaign? Good, now get all of the cakes. Did that? Try the multiplayer campaign. Done with that? Go for all of the multiplayer cakes. Even the seemingly inconsequential Achievements, like "get through an entire level without killing any scientists" teach the player about 'Splosion Man's attack range, jump distance, and the game's general physical mechanics. Got all of the other Achievements done? Now you are ready to take on Hardcore Mode. The task is certainly daunting, but not nearly the impossibility it appears to be upon beginning the game.

I implied earlier that the cooperative multiplayer in 'Splosion Man is a different experience than the single player campaign. To be more explicit, if you have only played 'Splosion Man's single player, then you have not nearly experienced everything the game has to offer. The recent trend in game design is to craft compelling multiplayer experiences beyond simply allowing more than one person to simultaneously play through the regular campaign, and Twisted Pixel delivered on this front better than anybody could have expected.

Whereas the single player experience is one focused on speed, precision, reaction, and memorization, the multiplayer campaign features an entirely different set of levels, focused on planning, communication, and coordination. While this slows the game down considerably, Twisted Pixel did some subtle, brilliant stuff with the level design to alleviate that. In the cooperative campaign there are the main puzzle rooms, and the intercalary corridors. While the main rooms will test your party's abilities to the extreme, the hallways in between the main rooms are easily navigable and filled with breakables. These serve as mini rewards for finishing the main sections. After what could potentially be several minutes required to coordinate a team through a main room, the players are all gifted the ability to just run amok and take in 'Splosion Man's other virtue: its aforementioned charm.

All of these design decisions come together, along with the expert creation of a character who is inherently entertaining to play as, to create a nearly perfect experience. If I were ever asked to lecture on great game design, my PowerPoint would be filled with slides from 'Splosion Man.
#Community    #Xbox360
Login to vote this up!