No More Heroes and the Deconstruction of the Phallus

11:40 AM on 06.22.2010 (server time)    0
Before starting, there are some things that have to be said. This little thingy here has been written and rewritten several times, and was originally conceived for an University Class focussing on Women's Writing. So, if you think, some things are a bit over-explained for people new to the medium, that is the reason why. Also, this contains an unmeasurable amount of spoilers, so if you don't want the game to be spoiled for you, keep away from this article.

To start things of, we need some definitions. First of all, Phallus does not only mean Penis. Phallus is the institution that is build around the imaginary power that the male gender conception provides. It is an image for the patriarchal concept of the bigger part of the western culture and society.

No More Heroes is a game that many consider to be quite trivial. This is mostly due to the fact that it uses a lot of swearing, some immature imagery and an immense amount of over the top violence and humor. But, as soon as you look past these factors, you will encounter something deep and thought provoking. The following article is the product of my three playthroughs of the first No More Heroes game. That alone took around 35 hours of pure gameplay. It is also important to note, that this article only handles the Wii version of the game. 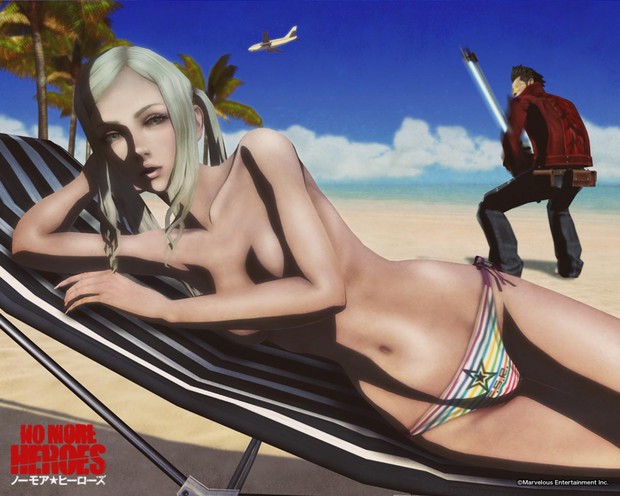 Before we come to all the meaty stuff, it is really important to understand certain things about this game:

The protagonist, Travis Touchdown, is nothing more than a representation of gamers as a whole. To quote a very interesting analysis: „Thus Travis is us and we are Travis and as the game unfolds this becomes further confirmed and all the more troubling.“1
The game as a whole is a self-reflexive commentary on what videogames have become and can be
There are certain cross references to another game by Goichi Suda, called Killer7, that might give a broader picture. Since I have not yet completed that game, I can't give that much insight into it.

It is also advisable to read the following article.

So, is everybody ready? Ok, then let's head to the Garden of Madness...

Many videogames seem to be nothing more than male power fantasies: violence is often the best way in order to find solutions for your problems, which means you will use a chainsaw more than once in your gaming career in order to win an „argument“. No More Heroes is absolutely no exception to this rule of thumb. You have a Beam Katana, named like this in fear of copyright infringement, and fighting with that kind of weapon often ends in a huge bloody mess.

The game thus questions that male empowerment by demonstrating it in a very direct and quite absurd way. A way that may seem trivial or stupid to you (random reader of both sexes now again), but still a very effective one. This is of course not the only time that „masculinity“ is the main topic of the games elements. Let's talk about one of the most important functions of „masculinity“: Fatherhood.

If you take apart all the characters in the game, and hey, that's what I'm here for, you will notice one thing: There is no real, stable father figure. No More Heroes does EVERYTHING in order to destroy the concept of fatherhood. Want Examples?


(Starting around 3.30 minutes in)
Dr. Peace is one of the first Ranked Assassins Travis has to fight. Every ranked assassin gets his own cut-scene and his own death scene, in fact the only narrative structures that can be found ad-hoc in the game. During these few minutes, one of the main topics of conversation is already the broken relationship between the assassin and his own daughter. As a father, he seems to have failed: he has not seen his own daughter in 10 years and even during the first dinner in all that time, the atmosphere was not good.


(around 1.40 minutes in)
Shinobu has lost her father and accuses Travis of having murdered him. Here, the father is never present: for Shinobu he is dead, for Travis, he was only a mentor on a tape he could learn from. The father function remains totally unfulfilled.


(around 35 seconds in)
The Speed Buster is pretty much one of the more interesting ennemies: Thunder Ryu, the master of and thus also father figure for Travis is killed here. Not only does this scene link itself to the Shinobu one, but it is also very important to note that Ryu is killed because of the cat that distracts him. It is Travis' cat and is called Jeane.


(around 2 Minutes in)
First of all, before you actually get to this boss fight, you have a level full of enemies that look like Darth Vader. This is not only a funny reference, but a very “serious” intertextual link: Darth Vader is pretty much the overpotent father figure that has to be overcome. You have to kill him over and over again, in order to gain access to a person that calls himself „Your TRUE father“.
It makes you wonder, if the whole game has been nothing else than the search for a true father figure and it is impressive that this figure at the end is killed by the ex girlfriend of Travis. She's called Jeane.

The game now does one of the most memorable things in videogame history. Up until this part, the main motivation for Travis and thus also for the player for killing all these people was to be able to sleep with Sylvia Christel at the very end of it. But now, Travis and the player are actually informed about their real Backstory wound: The parents of Travis have been killed by Jeane, right in front of his eyes. Having repressed the memory of this parricide (and half-matricide), Travis becomes the tool of Sylvia. It is also important to note, that we have a new parricide right here, even though he is not Travis' „true father“. In the end, Jeane (including the cat) causes three father figures to die.
The very first father figure, the actual parents of Travis and Jeane (being the half sister of Travis), is an unstable one at best: for Travis, he seemed to be a very typical father. At least until Jeane tells him the „unspeakable“ truth. In the original game, that part is actually fast forwarded, and the player can not understand it. In that way, Jeane can actually speak of the unspeakable, the incest. The version on the internet though is slowed down, and reveals that Jeane is not only the half sister of Travis but was also the sex slave of their father that continually raped her (the game only speaks of molesting, but I think it is safe to assume that rape is meant here). Thus, that father also becomes an overpotent father and in conclusion, an unfather.

By doing this, the game essentially destroys the concept of the dominant father, the power structure that surrounds masculinity and thus the phallus. If we also take into the consideration, that Sylvia Christel is the mastermind behind the rank fights, masculinity as a whole is questioned. It is also interesting to note, that organizing UAA is an act of independence by Sylvia vis ą vis her husband Henry.

It is quite impressive, how much you can find in this game, if you only want to. Of course, this is only my interpretation and you can totally feel free to disagree with me.

Oh, and this won't be the last thing I write about No More Heroes, believe me.

Also, Cocks.
#Community    #Rants
Login to vote this up!