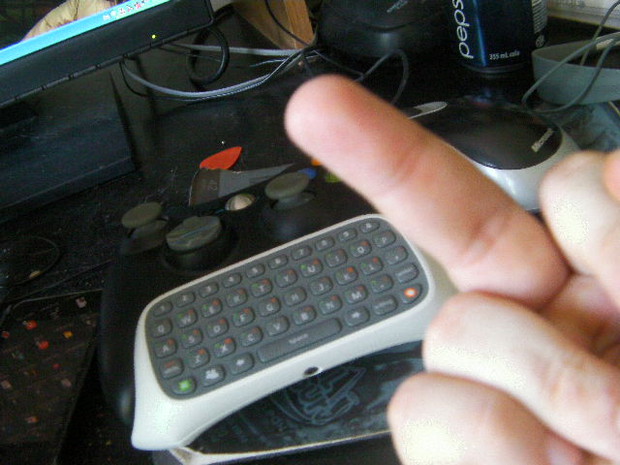 Want to know how to get it to work? It must be attached to the controller before you start the machine....and when you see the XBOX 360 logo, press the keypad and it "should" light up. I tried several different options then last night at 3am, the thing finally decided it wanted to work. All...all I can do is facepalm.

I Love My X-Box 360. Hate It's Hidden Costs And Despise It's New Model. EVERYONE SHOULD SUFFA AS I DID! Marcus doesn't like most 2 player games. I freakin' love that I can play more two player co-op games. He doesn't as much. So if you see me on, know I've spent over 500 hundred dollars just to be with you dear sweet X-Box 360 friends. So don't be shy, Marcus won't be dying to play Castle Crashers....Gears Of War 2, The Left 4 Dead Games...Halo 3 (though he lapped up TMNT 1989 Arcade).....so do message me. Quit your single player games and let's play Castle Crashers! SERIOUSLY GUYZ. That'd be cool. So if you see "garethxxgod" playing Mass Effect 2, Blue Dragon, Lost Oddessy or Fable II...know that it's Mr. Single Player doing his RPG THANG.

Oh and that My 360 Wallet Raped Me. It's Neither Good or Entirely Bad...but it happened and if after like so many before me can walk out of that without being destitute then...well...did I just get suckered?
#Community    #Xbox360
Login to vote this up!