I have never really payed attention to the indie game marketplace on Xbox Live. However, for some reason I looked the other day and noticed an interesting looking game. Thus, I downloaded the trial for Protect Me Knight and fell in love with it immediately. It's retro style and gameplay hooked me from it's intro and I couldn't put it down.

Protect Me Knight is basically a defense game where up to four players (No online play sadly) have a princess in the middle that needs protecting. You have a choice between four different characters, a mage, amazonian, knight and ninja. Each character has different attacks and abilities. The knight is the basic all around melee guy, able to spin in circles and throw an axe across the field that bounces off enemies. The ninja attacks viciously fast, lays bombs that look like the princess, and can turn invisible when he blocks. The mage's attacks aren't too strong, but her fire ball can have devastating effects as it spreads. The amazonian is another vicious attacker and she throws a boomerang that can twirl around her as long as you keep moving.

Every enemy you slay grants you heart points, in which you can level up your character, level up a barricade, or use a devastating attack that will grant you some breathing room. This adds another surprising level in depth into the game that make you want to advance and see what new move you can unlock or see what your max ability looks like. This kept my friends playing as well, all making different choices as we went along,

This game is meant to be played with three or four players, that seems pretty obvious once you get past the first few stages. The game throws a relentless amount of orcs, minotaurs, dragons, blimps, centipedes, and armored lizards at you. There were many times where the screen was literally filled with enemies and we couldn't move. 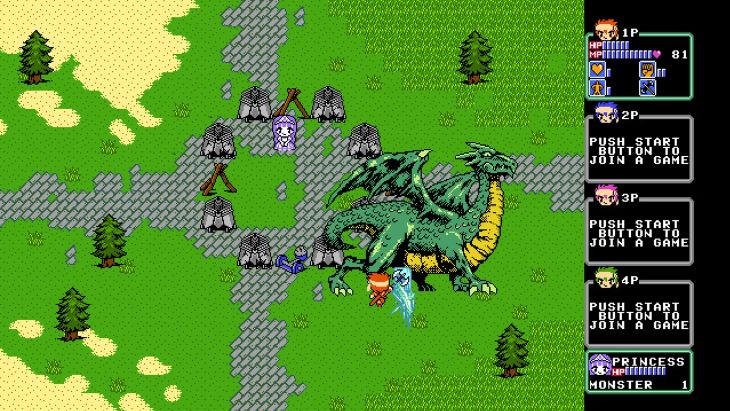 So, if you are looking for a good old retro game that you can enjoy with some friends on a couch, this is an excellent indie game. Especially at only 240 microsoft banana dollars, you can't really go wrong with it. If I had to say which game is my favorite indie game, i would have to say Protect Me Knight. Yes, even over I Made a Game With Zombies In It.
#Community
Login to vote this up!